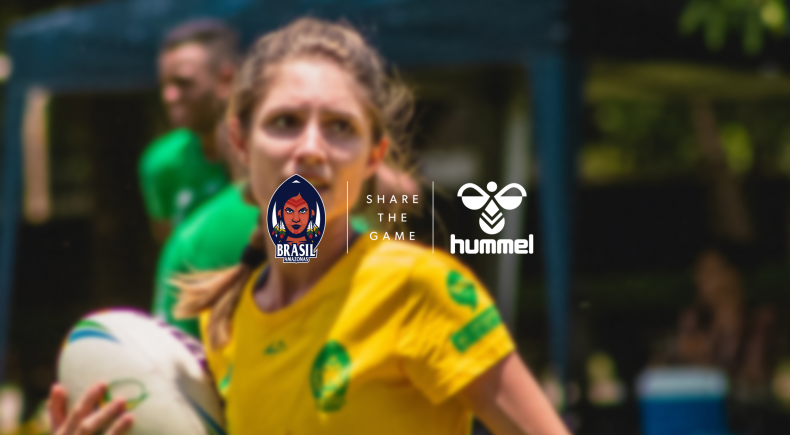 Brasil Rugby League has secured a deal with one of the oldest and most prestigious names in sports apparel, joining forces with Hummel for the coming Rugby League World Cup.

Brasil’s history-making female team – the Amazonas – will proudly wear the Hummel brand when they play the opening fixture of the Women’s World Cup at Emerald Headingley Stadium, Leeds.

Head coach Paul Grundy’s 40-strong extended squad of athletes, to be confirmed in coming days, will also wear Hummel garments in a series of high-performance camps prior to the World Cup, scheduled for November 2021.

“We are aware we are the ‘new kids on the block’ when it comes to the Rugby League World Cup, but this association with Hummel shows how seriously we are treating the opportunity,” Burgin said.

“Consistent and significant improvements in all areas of our operations are the goal, and there are few things as important to the visage of a team than the uniforms it wears.

“We know in Hummel we will be getting first-rate quality and designs with a brand that is loved and trusted across many sports throughout the world.

“Aside from personally being a big Hull FC fan, we have many players in Brasil who have grown up supporting handball, volleyball and football teams who wear the Hummel brand.

“Our Brazilian-based designer Liam Piacente will work closely with the Hummel team to ensure we are eye-catching in more ways than one when the first whistle of the World Cup sounds.”

Burgin thanked Craig Poskitt, working on behalf of Hummel, for going the extra mile in negotiations and supporting the first Rugby League World Cup team to qualify from Latin America.

Poskitt said it was exciting for Hummel to be associated with the pioneering Amazonas, who have promised to play with flair throughout their debut tournament, including the opening game against hosts England.

“Almost 100 years ago when Hummel started out, it would never have been conceived that we would one day see Brasil at a Rugby League World Cup,” Poskitt said.

“For me, as a lifelong rugby league fan, I think it’s a remarkable moment in the expansion of the sport and it’s a thrill that Hummel gets to be a part of that.

“As a company, Hummel has maintained a strong presence in rugby league in recent times, and have built a reputation over decades of delivering quality to our partners.

“The Amazonas’ place in history will last forever and every fan at the stadium, every broadcast viewer and every photo will see the iconic Hummel logo emblazoned on each uniform.”

As well as developing a predominantly yellow-and-green kit for Brasil’s matches with England and Canada, Hummel will also produce a surprise alternative kit for the clash against Papua New Guinea.

A specially-designed training uniform, which carries the name of every player, volunteer and financial supporter to contribute in Brasil’s maiden World Cup campaign, is also currently in production