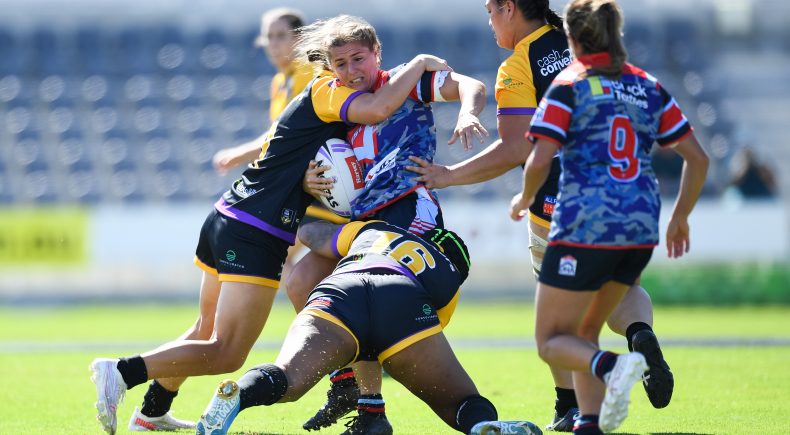 NSW, Queensland and the First Nation Gems were among the big winners on day one of the Harvey Norman National Championships in Redcliffe.

The major women’s event got underway on Thursday with five 20-minute matches in the open division and four matches in the under 19s age group, under a new format for this year’s tournament.

For the first time, the tournament welcomed the first-ever Indigenous opens side with the Gems going through the day unbeaten with wins over Victoria and Northern Territory.

Young halves Akira Kelly and Kiya Simon gelled well for the Gems, while Rikka Lamb and Brittany Constable were also dangerous through the middle.

The Gems are well-led by coach Jess Skinner and former Jillaroo Bec Young, while Dean Widders is also overseeing their progress.

Earlier, the Northern Territory recorded a 6-0 victory over South Australia with a try to Bianca Stokes proving the difference for the Titans.

Another player to watch, Zahn Anthony, was among the best in a beaten SA side, who will take on Western Australia and Victoria on Friday.

For Victoria, they were spirited despite dropping both games on day one with upcoming clashes against South Australia and Northern Territory to follow.

The Victorians felt the impact of the Australian Defence Force’s arrival to the tournament in match four to go down 12-4 in a tight contest.

Tries to Lauren Dam and Ashlee Makim secured the points for the ADF, who are being mentored by NRLW players Meg Ward, Julia Robinson and Michaela Peck for the week.

The ADF couldn’t, however, replicate their first-up performance, dropping their second clash of the morning against Western Australia.

WA proved the surprise packets of the round to hold on with a 6-0 victory with halfback Kailey Thompson starring with a try and goal.

In the under 19s draw, both NSW and Queensland’s sides proved far too strong for the remainder of the competition to record shut-out results in the afternoon.

The Queensland Rubys sent the biggest warning to the rest of the competition by thumping an inexperienced South Australia side 66-0.

NSW City opened their account with a 42-0 win over Victoria with Cronulla Sharks representative Andie Robinson scoring a treble for the side.

In the other matches, Queensland Sapphires recorded a 44-0 win over Western Australia, while NSW Country rounded out the day with a 28-0 victory against the Northern Territory.

Every team will be in action again on Friday and Saturday before the finals are played on Sunday.