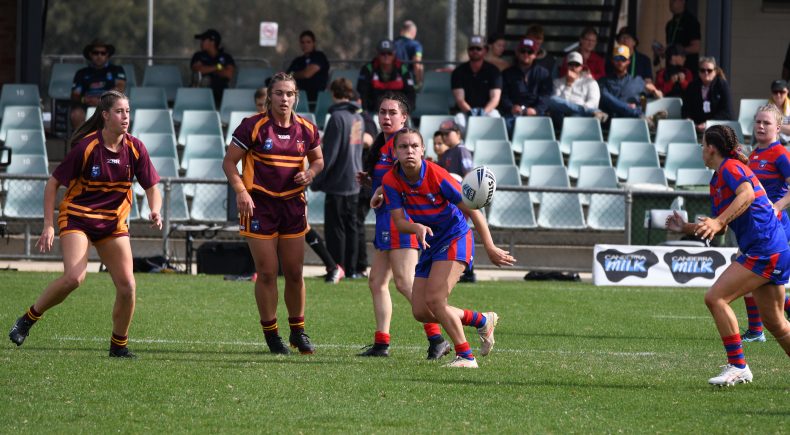 The Knights hardly put a foot wrong as they controlled the middle of the field through their physicality and were steered around expertly by halfback Ashlee Harvey.

Margaret Watson opened the scoring for the Knights are she picked up the ball from dummy half and caught the markers napping to score underneath the posts.

The Bulls struggled to hold on the ball and continued to make errors early in the tackle count, ensuring the Knights maintained good field position. A handling error from Bulls centre Elise Smith gave the Knights a scrum 30 metres out from the try line and Christa Smith made it count as she scored down the left edge.

A penalty for a high tackle gave the Knights an opportunity to add an extra two points and halfback Ashlee Harvey duly obliged.

The Knights continued to play the first half entirely in their attacking half as they piled on the pressure. A crash ball to prop Emma Young ensured that the Knights converted their dominance into points.

Phoebe Desmond added a fourth try just seconds before the halftime break as she crashed over the line from close range. Harvey once again added the extras, as the Knights had one hand firmly on the trophy with a 26-0 lead at halftime.

The Knights didn’t miss a beat after the interval and had the perfect opportunity to continue their scoring spree when Riverina fullback Sophie Gaynor was unable to defuse a towering kick which gave the Knights a full set just metres out from the try line.

Harmony Liddell showed late footwork close to the line to weave her way through the defence and extend the lead.

Gaynor continued to get targeted with the high ball and another knock-on gave opposing fullback, Amy Broadhead, the opportunity to score. Ashlee Harvey continued her meticulous form with the boot to kick her seventh consecutive goal.

Riverina winger Janjan Ravu provided the Bulls their best opportunity of the match in the dying moments as she sprinted down the left touchline but was eventually tackled by desperate Newcastle defence. In good field position, five-eighth Bailey Porter put in a grubber towards the in-goal but it was easily defused as the Knights maintained managed to keep the Bulls scoreless.

The Knights win sees them claim the second edition of the Country Championships after the Bulls won the inaugural competition in 2019.