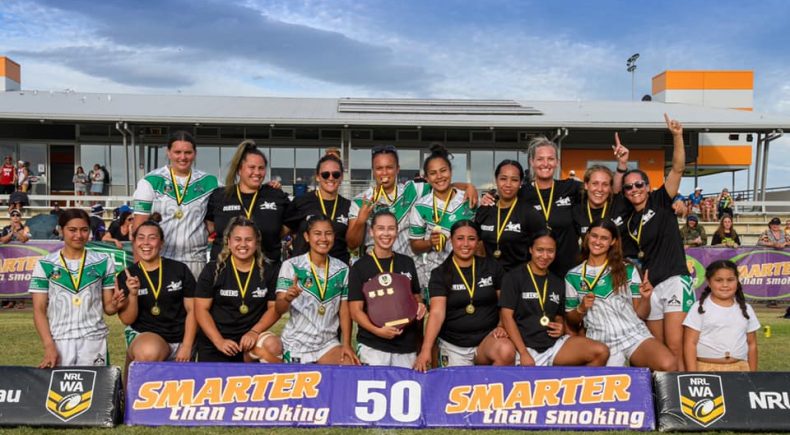 Aotearoa Queenz have gone back to back in the NRL WA Harmony Cup, defeating arch-rivals Hawaiki Roa 12 points to 4.

In what was a great weekend for Women’s Rugby League, we had 9 teams participate in this years event, with new teams Ta’ahine Toa (Tonga) and Nga Tamatoa (Maori) making their debuts at Harmony Cup, and both teams making an immediate impression. Nga Tamatoa were particularly impressive, showing a free-flowing brand of rugby league behind strike weapons Jessika Bussey and Tamika Jones.

But in what many people deemed as inevitable, it was the Anneka Stephens’ led Aotearoa Queenz taking on Claudia Foster and Hawaiki Roa in the final once again. With both sides packed with representative talent across all sorts of codes, it was on for all money.

They clashed early on Saturday morning to open the tournament in a high scoring affair, with the Queenz coming away as 20-14 victors, with everyone watching commenting on how slick both teams were with their ball movement.

In the final it was a back and forth affair, with both teams looking for a crack in the defence of their opponent. And it was the Queenz who blinked first. Nicole Ledington, who had shown great flair and sleight of hand, made a great run down field and linked up with Alesha Foster only to be brought down short of the line. The damage was done though, as the next play the ball was spread to Heather Tawhitapou who touched down in the corner to put Roa up 4-0.

Unfortunately it was all un-done 30 seconds later, when off the tap restart, Queenz put the ball in the hands of NRL WA Women’s Player of the year Kailey Thompson, who dragged in two defenders and put Trilleen Pomare into a yawning gap, and she duly sped away to score in the corner.

With it tied up at four points a piece, it became a slugfest, with a highlight being an amazing run from Hawaiki Roa’s Naomi Kamizona-Heke, who managed to run through 3 defenders before being bundled into touch. This seemed to wake up the Queenz, who with 30 seconds remaining swung the ball left, for Aisha Wigley and Azhure Turner to go on a 40 metre run and set up great field position. And two plays later, Stephens threw the dummy and cut through the Roa defence to score on the half-time buzzer sending the Queenz 8 points to 4 up at halftime.

Back out for the second half, and the arm wrestle went back and forth with both teams not giving up much. A great run from Ariana Hira-Herangi was then countered by searching run from Rheanna Quan. Alas, the Queenz were not to be denied. After an errant forward pass from Roa, the Queenz switched the ball back behind the ruck, for Pomare to ice the game, sending Bobbie-Lee Barker in for the final try of the game untouched.

With close to no time left on the clock, Hawaiki Roa were unable to mount that final charge and the Queenz, for the second year in a row were victorious.