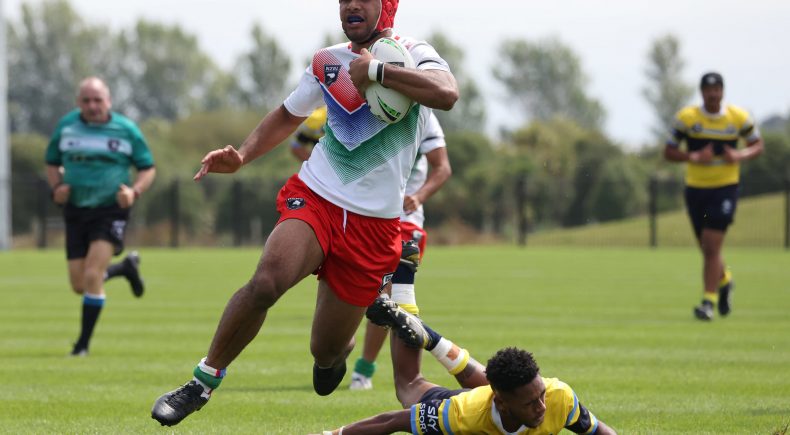 South Island made a huge statement in Round 1 of the New Zealand Rugby League National 20s competition, defeating Northland 56-14 with a blistering attacking performance at Ngā Puna Wai Sports Hub in Christchurch.

Level 2 restrictions coming into effect on Sunday morning prevented spectators from attending the match – a shame given the perfect conditions on the last day of summer and the 13-try exhibition the combatants delivered.

A dominant performance from the South Island forwards laid the platform for the big victory, with lock Kyle Amer and props Junior Tuliakono and George Faavai partcularly strong. The likes of hooker Sincere Harraway, halfback Mesiah Asi and fullback Mapu Uasi – who scored a hat-trick among a 28-point individual haul – provided the polish, and centres Sala Faifale and Jack Skipper were a constant handful out wide.

After withstanding an early Northland assault on their line, South Island grabbed the ascendancy via a break from Uasi and a clever kick from Harraway to force a line dropout.

From the resultant possession, captain Harraway darted from dummy-half and stepped through the Northland defence for the first try.

Both sides were guilty of a spate of errors in the ensuing period, but South Island capitalised when they were able to hang onto the ball. Harraway’s threat from acting half again troubled Northland, combining with towering prop Tuliakiono, who reached out to score.

Uasi’s second conversion made 12-0 to the hosts in even time.

Northland hit back after being piggybacked downfield by a penalty. Interchange forward Dilano Henry Turner muscled over out wide despite the attention of three South Island defenders.

Faifale did it all himself five minutes later, receiving the ball in space from a Northland error and spearing through gap to bag his second four-pointer.

Northland managed to stem the flow of points until halftime but the South Island assault continued immediately after the resumption. Kiarn Wilson scored in the first set of the second half after toeing the ball ahead twice, Uasi scored a 50-metre runaway try in South Island’s next possession, and bruising lock Kyle Amer powered over for a richly-deserved touchdown soon afterwards.

The scoreline ballooned to 46-6 as Uasi flashed over for his second in the right-hand corner – South Island’s fourth try in just 13 minutes of second-half action. The Linwood Keas CRL premiership winner completed a 10-minute hat-trick a couple of sets later – and brought up the half-century for the home side – scorching down the sideline and dotting down under the posts for another half-field try.

Left winger Vaione Saki was the beneficiary of quick hands from his inside men, diving over for a simple try and a 56-6 lead.

Some respite finally arrived for Northland during the last 10 minutes. Impressive fullback and captain Eroni Biukoto broke through South Island’s right-edge defence and outsprinted the cover defence to score out wide, before making another bust and combining with halfback Ioane Loto’atu to lay on a try for front-rower Nigel Iro.