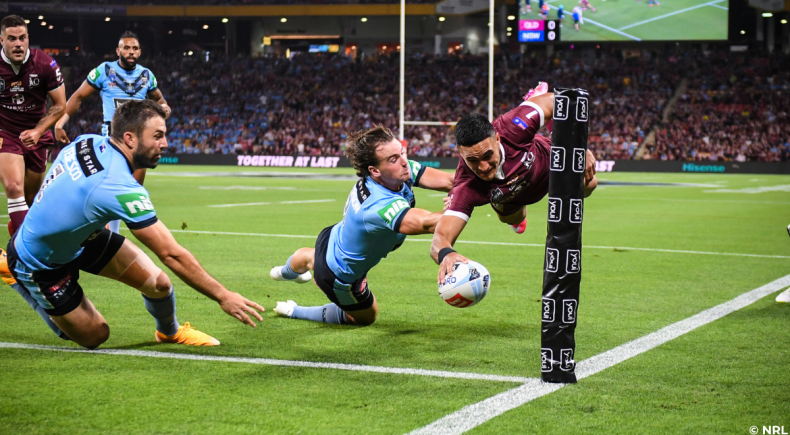 Queensland have celebrated a series win for the true believers with Cameron Munster leading Wayne Bennett’s babes to a stunning 20-14 win over a brave NSW on a night where a future star, Harry Grant, was born.

With his mentor Cameron Smith watching from the Channel Nine commentary box at Suncorp Stadium, 22-year-old Grant broke the game open in the second half with his dummy-half running and 62nd-minute try igniting the Maroons.

The match went right down to the wire with NSW attacking Queensland’s line late and calling for a captain’s challenge after the siren when Junior Paulo knocked-on, such was the closeness of the final stages.

Gallant NSW lost their captain James Tedesco to concussion in the 20th minute and five-eighth Cody Walker to an HIA late on.

Man of the match and Wally Lewis Medal winner Munster was enormous at five-eighth for Queensland while the Maroons forwards – led by Tino Fa’asuamaleaui and Lindsay Collins – defended with intensity.

When Bennett was brought back to coach the Maroons after a 17-year absence from the Origin arena there was a sense that a remarkable story was waiting to be written.

In a series where Queensland blooded 14 debutants, including four in the decider, the triumph will become a story for the ages.

Now the 2020 Maroons side will be etched in the history books as one of the great winners of a series against the odds, alongside the 1995 and 2001 teams which prevailed when given no chance.

In fact, skipper Daly Cherry-Evans in his post-game speech happily accepted the State of Origin shield on behalf of “the worst ever Queensland team”.

Bennett had Allan Langer in the 2001 decider to ignite the Maroons but in Munster he has a worthy heir to Langer’s throne as the go-to man who delivers on the biggest stage.

The talismanic five-eighth’s eyes-up cross-field kick late in the first half to set up Edrick Lee on the back of earlier brilliance was telling.

“We achieved something similar in 2001 when we brought Alf back for that third game and the key for us tonight was getting Munster back on the field for this game,” Bennett said.

“We didn’t have to bring him from England. We just had to make sure his head was OK.

“Munster is just a footballer. He makes things happen. He has got a lot of Allan Langer type characteristics about him.”

It was the injection of Grant that changed the game for the Maroons. Bennett gave Cameron Smith his Origin debut in game three of the 2003 series and it ushered in one of the greatest careers ever seen.

Grant has a decade or more ahead of him with the Maroons.

“Jake Friend did a lot of work for 25 minutes and then Harry was what we needed, to try and keep on building that momentum from Jake and keep us in the groove,” Bennett said.

“Harry did that magnificently and I kept those two guys on because they were both doing such a good job.”

Queensland dominated early and did not take their foot off the throat despite some tense moments.

The Maroons ran the ball on the last in the fourth minute with Munster sending it through the hands to Allan whose silky pass to Holmes still gave the winger plenty to do.

Holmes, who has proven masterful at finishing for Queensland, scored his ninth Origin try with a one-handed put down that was all class.

Queensland had the running early but the Blues made the most of an Allan fumble when he dropped a Nathan Cleary kick cold. Cherry-Evans failed to ground the ball and James Tedesco’s hand came down on the bobbling ball to level at 6-all.

Tedesco went to collect a kick at his usual one hundred miles an hour but collected the knee of Papalii instead flush on the head. A lump had formed within seconds as he was assisted from the field.

Munster magic then turned the game when on the last he grubbered short, regathered and then grubbered again. The Maroons regained possession and then Munster, seeing a chance out wide, put a cross-field kick in for Brenko Lee to tap it back for cousin Edrick to score and give Queensland a vital 12-6 lead.

The initial stages of the second half belonged to Grant, with his speed and guile out of dummy-half creating several chances that his teammates were unable to ice. The Blues did well to repel several raids initially and then defended their line for four consecutive sets with enormous courage and tenacity.

Queensland went out to a 14-6 lead courtesy of a Holmes penalty in the 58th minute before Grant went from dummy half and put the ball down on the line to take the homes side’s lead to 14 points.

Queensland’s discipline then let them down and NSW hit back through a Cody Walker play down the left side which put Daniel Tupou over.

Minutes later Holmes dropped the ball over the tryline and NSW marched down the other end of the park and landed a penalty to narrow the margin to six points with eight minutes remaining.

NSW refused to relent and kept coming at the Maroons who lost Allan to the sin-bin late after a challenge on Josh Addo-Carr. As they did in game one, the Maroons had to hang on for grim death to prevail.

The crowd of 49,155 at Suncorp Stadium was a world record since the COVID outbreak and was an 18th man for the Maroons.

Forty years after Arthur Beetson’s men secured the future of the Origin concept the Queenslanders secured a victory that will be celebrated in 2060 as the 1980 side is now.

Bennett said his side took seriously its duty to replicate the 1980 spirit.

“One of the things personally for me tonight was that it was 40 years since we started Origin, and the things Arthur and all those wonderful players displayed back then we displayed here tonight,” Bennett said.

“There was the great Queensland spirit, the never give up attitude and doing it for your mate. It was all on display.

“I am proud of the fact that on our watch we were able to maintain the traditions and things that make Queensland great.” 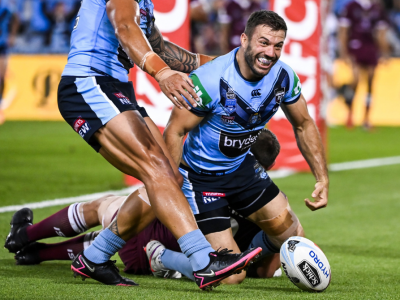 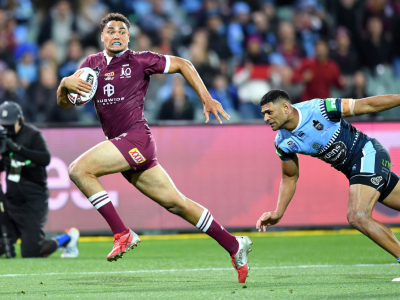 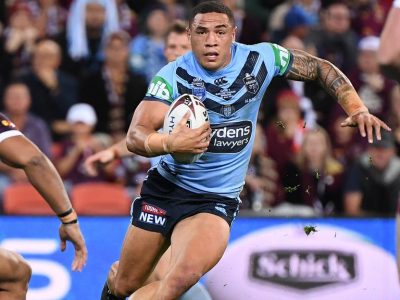 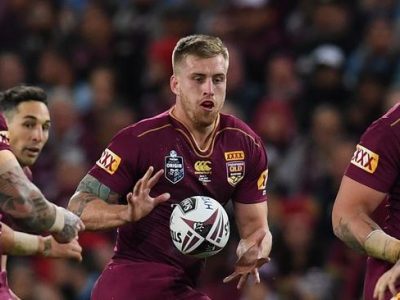