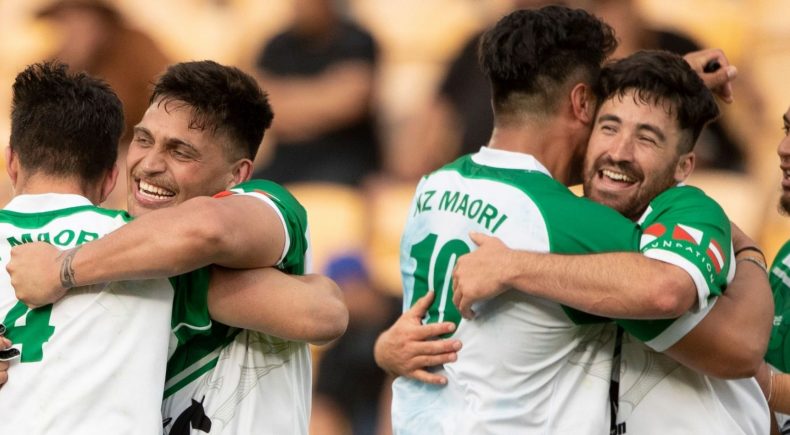 A haka showdown with the support of the NZ18 players set the scene for what would be a passionate affair between the Residents and NZ Maori.

It took 14 minutes to see the opening try and it didn’t disappoint, a left edge set play finished with Residents winger Sam Fa’apito going over untouched. Captain Francis Leger converted to make it a 6-0 lead over the Maori Residents.

The Maori Residents hit back instantly as they won their own short kick-off, and off that set James Waterson latched onto a grubber in behind to score. Josiah Afu added the extra two to level up the score.

After constant pressure, Maori Resident front rower Trent Schaumakal twisted his way over the line as repeat sets proved detrimental to the Residents outfit. Josiah Afu again added the extras to take their first lead of the evening.

Number 17 Keanu Dawson made an instant impact coming on for the Residents side, as he crashed over to bridge the gap. Leger converted to level the scores again with seven remaining in the first half.

Patrick Sipley grabbed the first points, six minutes into the second stanza as he put the Residents back into the lead. Leger converted to take the score to 18-12.

A sublime kick from Sam Nati ended with some magic from Matti Tuitama putting Sam Fa’apito over for his second. Leger unable to convert as the Residents went up 22 points to 12 with just over 20 minutes to go.

Three minutes later Sam Fa’apito claimed his hat trick when he picked off a pass from Jordan Bunce and took it 90 metres to score. Leger was unable to convert Fa’apito’s scintillating effort as the score remained 26-12. All the momentum was with the NZ Residents as they looked to close the game out with 10 remaining,

However a penalty on the Residents’ line saw momentum shift as the mistake afforded an opportunity for the Maori’s and they turned it into points. Cole Waaka’s cut out ball put James Waterson over for his second of the evening. Conversion unsuccessful as the Maori side reduced the margin to 10.

James Waterson grabbed himself a hat trick of his own to pull the game within one score, Josiah Afu converted from the left side line which created a grandstand finish. 26-22 with only three minutes left in the match.

The NZ Maori then completed the stunning 14 point comeback with only six remaining. Mikaere Beattie capped off an impressive 50-metre move as he crashed over for a try right under the post, stealing the win from the NZ Residents and pulling off an impressive 28-26 upset.