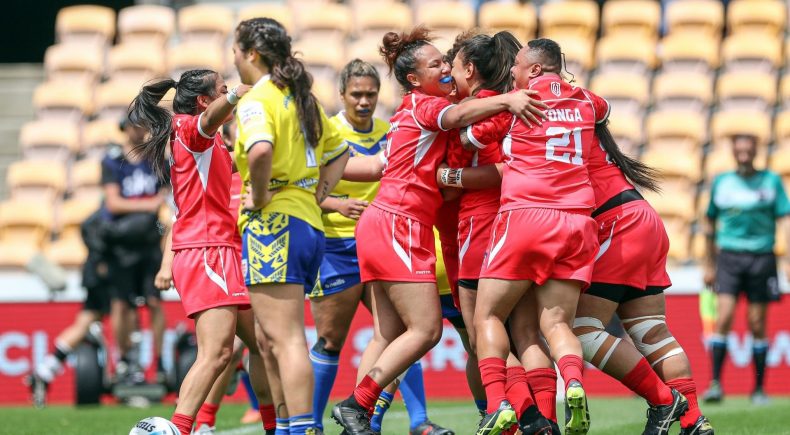 Mt Smart hosted its first game of the calendar year as Niue Rugby League and Hakula Tonga went head to head as part of NZRL’s Clash of the Pacific Women’s Double Header.

It didn’t take long for Tonga to break the deadlock as number 23 Alice Vailea took advantage of a great first set to bundle over from dummy half. Tonga took a 4-0 lead early as the conversion was unsuccessful.

Four minutes later Mele Hufanga doubled the lead beating two defenders on her way to the line. Hufanga converting her own score to make it 10-0.

Tongan fullback Malie Taulaga sliced her way through to score her first of the afternoon, as the Hakula woman begin to show their dominance. 14-0 after 11 minutes.

Manutala’aho Huni grabbed her first, crashing over after a superb offload from Taulaga put her in open space. Hufanga added the extras to make the lead 20-0 after 16 minutes.

A Niue mistake close to the line was again made to pay as Tongan captain Lilieta Mamau-Pinomi bulldozed her way over the line. Hufanga added the conversion to take the lead to 26-0 after 22 minutes.

From the kickoff set, winger Sarah Filimoe’atu finished off a clinical move from their own half, going 50 metres to score under the post. Hufanga converts. 32-0 with 15 minutes remaining in the first stanza.

Nancy Sikei Mafile’o then went over for her first of the afternoon. Conversion successful as Tonga lead 38-0.

Niue received their first penalty and did not fail to convert that into points as Niue captain Bobbie Kamutoa fought her way over the line. Conversion unsuccessful as the score remained 38-4.

Both teams went into the sheds at half time, Tonga leading Niue 38 points to four.

After a battling eight minutes, it was Niue who capitalised first as Holly Hiko received a lovely cut out pass to go over for the first try of the second period. Niue again unable to kick the conversion attempt as they stay on eight points.

Danger woman Mele Hufanga again weaved her way out of trouble, and went on a scintillating 80 metre effort, crushing any sort of comeback from the Niuean side. She was unable to convert her second try. Tonga lead 42-8 after 56 minutes.

A minute later Nancy Sikei Mafile’o scored her second of the game as Hakula woman broaden the lead further. Hufanga converts from right in front as Tonga create a 40-point buffer. 48-8.

A left foot-step by the Tongan number 1 put her right through as Taulaga added another try of her own. Hufanga converted to widen the gap to 54 points to eight.

The number 21, Mele Hufanga achieved her hat trick with 12 minutes to go, again showing her rampant strength and footwork. She converted from in front to take the lead to 60 points to eight.

With 7 minutes remaining, Hakula winger Sarah Filimoe’atu grabbed her second in similar vein as her first, breaking the line and going 50 metres to score under the post, Hufanga again converted to make the lead 66-8.

A late red card seemed consolation for Niue as Tonga go out 66-8 winners in what was an exciting and quality way to usher International Rugby League back.