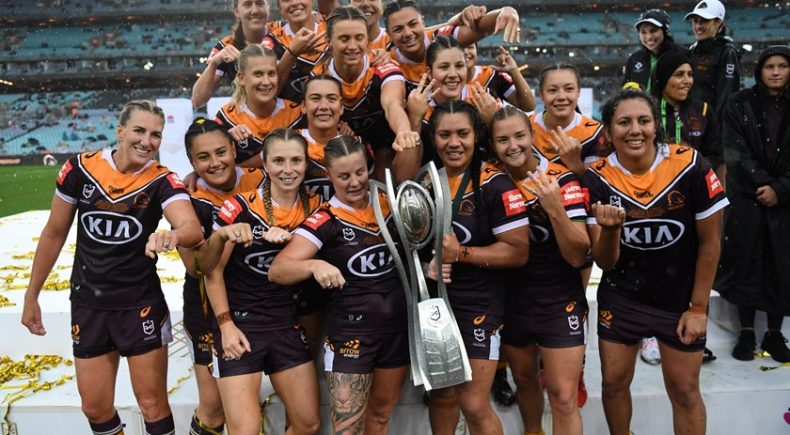 Premiership-winning Broncos coach Kelvin Wright says while it’s hard to compare titles, their third will go down as most satisfying given the circumstances around their campaign.

Wright praised the efforts of the Broncos defensive line in their 20-10 triumph over the Roosters at ANZ Stadium on Sunday which secured the club’s third premiership in as many seasons.

In easily the closest Telstra Women’s Premiership grand final in three years, the Broncos led the Tricolours 12-10 in a high-quality contest in greasy conditions but the defending champions held their nerve while adding two second-half tries.

“It’s really satisfying … winning on grand final day is just one of the most amazing feelings,” Wright said.

“That one there was a lot more nerves during the game. It was a tough game and a credit to the Roosters who just kept coming.

“Our team had to dig deep, it’s a pretty amazing feeling. We kept turning them away.

“I thought the defence just shows the determination and character of the players we have in our team.”

The victory reaffirmed the club’s status as the benchmark NRLW club with strong performances from Karyn Murphy Medal winner Amber Hall, Tarryn Aiken and Millie Boyle giving the Broncos an edge throughout the contest.

The Broncos resisted several surges from Roosters, particularly late, but the Tricolours struggled to come up with the big plays when the game was on the line.

Aiken was among the best on the ground in the first half and helped give the Broncos a 12-0 lead with a short ball for Amber Hall sending the bullocking forward over for the side’s second of the afternoon.

Hall, who returned from a one-match ban for a hip-drop tackle in round two, finished the game with a try, 154 metres, three tackle busts and three offloads.

The Roosters were boosted by the return of Botille Vette-Welsh from a hamstring injury and the Jillaroos representative didn’t disappoint with an outstanding effort in a beaten side.

A rushed pass from Simaima Taufa turned possession over for the Roosters early and the Broncos struck in the following set with Aiken busting through on the left edge before finding Tamika Upton in support.

Just when the Broncos looked to be on their way to a dominant performance, a successful captain’s challenge from Roosters forward Sarah Togatuki swung the momentum as the Tricolours went over on the right edge to get on the board.

The Roosters began to control the match with a 58 percent possession rate despite the Broncos maintaining a perfect opening 30 minutes of completions.

“The completion rates in the conditions I thought were great,” Wright said.

“We had a few towards the end but overall it was well done by the team. We wanted an early lead and to start fast. We did that in both halves and it put them on the back foot, they were chasing the whole game.”

Bench utility Quincy Dodd has impressed for the side over the past month and got the Roosters back to within two points with a darting effort from close range.

The Roosters had a big chance to go on the attack after the break but failed to find touch following a penalty in another momentum swing in the match.

Brisbane have proven to need no invite attacking in any opposition’s 20-metre zone and extended their lead with Chelsea Lenarduzzi crashing over after receiving a Lauren Brown short ball.

The Broncos went back-to-back with 15 minutes remaining as former Rooster Tallisha Harden, who was the club’s player of the year last season, ran a strong line off Ali Brigginshaw to establish a match-winning lead.

Brigginshaw said the Broncos had a mentality of getting the victory for the family and friends involved with the side’s third campaign.

“When we scored a couple of tries and got back to halfway we were saying to do if for those people,” Brigginshaw said.

“Family isn’t here where they usually would be in the crowds. It’s a big thing for these girls. I don’t think people realise how much the Broncos have had to sacrificed this year.