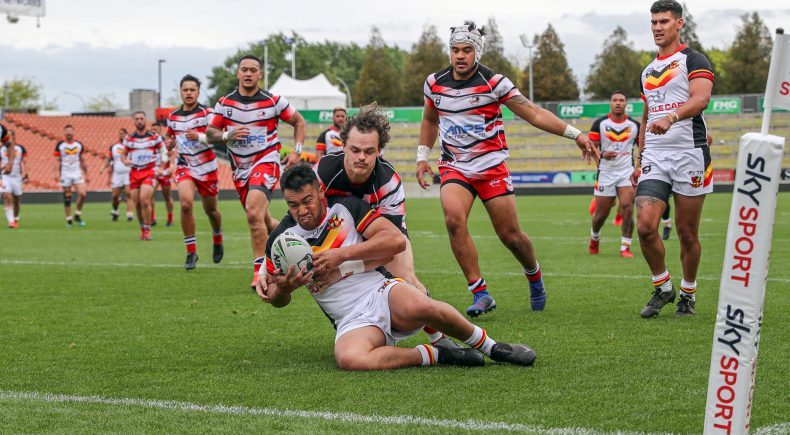 “You’ve got to meet them to beat them and muscle up” was the message from Waikato Head Coach Marrin Haggie in the pre-game interviews and it wasn’t to be for the Waikato Mana.

In the first 30 seconds, Counties Manukau showed they meant business with a Nicholas Worthington try that was easily converted to put the visitors in front 6-0.

Connor Taurua-Purcell was hard to stop as he wriggled out of a tackle to cross the line for Counties for the side’s second try and Doyle kicked two from two to push their lead to 12-0.

There were plenty of coach killers for Waikato coach Marrin Haggie to mull over with spilled balls at crucial moments for the home side who succumbed to the pressure mounted by a strong Counties defense.

Mcgee was strong under the high balls and used that to his advantage. The hits just kept coming from the Stingrays scoring successive tries and extending their lead to 24-0 with Doyle’s boot adding the extra points each time.

But Counties could have been guilty of complacency as a few offloads worked in Waikato’s favour to see their first points added to the scoreboard, much to their relief in the 25th minute of the first half (24-4).

A rare 40/20 had Waikato back in Counties territory looking promising to score again but the ball was dropped right on the line.

Waikato didn’t have time to dabble in disappointment as Counties took the quick restart and before we knew it, Filipe Vaeafisi was dancing down the wing to score a four-pointer followed by another successful conversion from Doyle (30-4).

Taufa added to their growing tally a minute later with another try five minutes before halftime, Doyle’s first missed conversion coming from out wide – the score remaining 34-4.

Waikato must have been tuned up at halftime as they came out fighting in the second half and opened the scoreboard for the second 40 with Siteine crossing the line for Waikato’s second try (34-8).

Counties Manukau’s first of the second half came moments later with McGee floating through a lacking Waikato Mana defense to bank another four points for the visitors.

The first 20 minutes of the second half saw a much closer battle with the two teams at one try a piece right before Waikato’s talented youngster Keanu Dawson powered over the line to score his side’s third try of the game – scoreboard reading 38-14.

For Waikato, the final 20 minutes had to be all about closing the gap and we certainly saw more kaha from the Mana as they looked to get back in the game. Their sets got better and better as possession started to build forcing their first line drop out in the 66th minute.

Some brilliant play from Waikato on the back of the line drop out had Chase Kennedy scuttle across the line with some brilliant footwork and with the try converted, the Mana suddenly found themselves within a sniff of a victory with 10 minutes to go (38-20).

However, Counties reminded them it wasn’t going to come easily, the visitors banking a four-pointer of their own pushing their lead out to 44-20 with Doyle’s successful conversion securing their spot in the Premiership final to be played at Trust Arena against the Akarana Falcons on 31 October.