Mid-Central Vipers fight back to beat Bulls at home 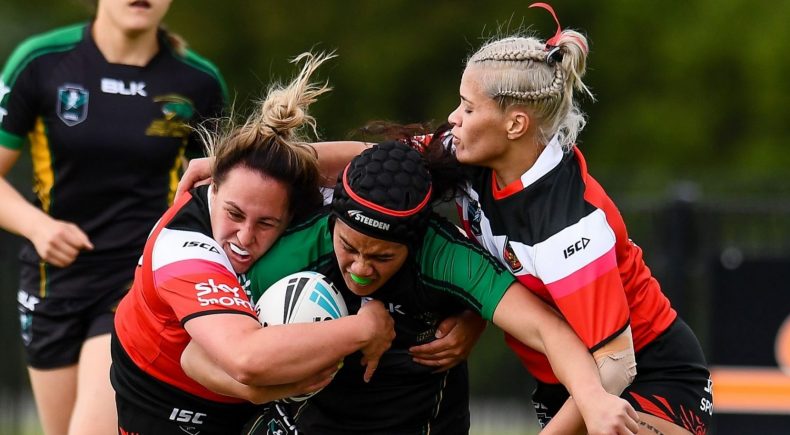 The match kicked off with back to back errors as a cut-out pass by Mid Central went begging over the side-line, Canterbury then gifted possession back to the Vipers with a knock-on at the scrum shortly after.

Mid Central was back in promising field possession which saw hooker Paris Paul score from dummy half jumping through a gap in the Canterbury defence, the score 4 – 0 with five minutes gone.

An impressive run up the middle from Samoan international Sui Tauasa-Pauaraisa put Canterbury in 10 meters of their line. Canterbury was gifted a repeat set off a failed attempt at an intercept by Mid Central which saw Canterbury half Alisha Fonmoa cleverly pounce on her own grubber beating the Vipers defenders to score Canterbury’s first points of the day. The scores were locked 4 all.

A Canterbury mistake from the kick-off then gifted possession straight back to the Vipers which fullback Jashana Tetue Teuawiri capitalised on with a strong barge over the line putting Mid-Central back in front by 4. Another unsuccessful conversion meant the score remains 8 – 4.

A series of back to back errors meant momentum was back with the Vipers as a clever cut out pass by Windle put Viper forward Tui Edwards straight through a defensive gap and over for Mid-Centrals third of the game. Another unsuccessful conversion kept the score at 12 – 4.

Mid Central failed to defuse an impressive Canterbury kick-off which put the home team in good attacking position. Canterbury shifted the ball out to the right edge where Alisha Fonmoa went over for her second after a quick inside step over the line. Canterbury were the first team to complete a conversion bringing them back within two points 12 – 10.

The Vipers were quick to respond to Canterbury’s kick off with an impressive one of their own which Canterbury was unable to defuse in goal putting Mid Central back in good attacking position. However, a mistake at the play ball saw the opportunity go begging for the Vipers.

Back to back to penalties for Canterbury put them in prime position on their line, and a dummy from Canterbury hooker and co-captain Fleur Barker saw her barge over for Canterbury’s third, putting them in front for the first time right before half time.

Both teams head to sheds with three tries each yet goal kicking proved the difference as Canterbury had the edge 14 – 12.

The second half kicked off with some impressive Canterbury defence as they defused a fiery attacking set from the Vipers.

After six tries in the first half, both teams amped up their defence in the second 40 as it took 15 minutes before more points hit the board. Canterbury prop Angela Petero barged over for another four-pointer for Canterbury bringing their lead out to six, 18 – 12.

Mid Central found themselves back in good attacking position and a misread In defence by Canterbury allowed the Vipers a try under the posts, the conversion evened the score once again, 18 apiece with 10 minutes to go.

An unlucky knock-on under the high ball by Canterbury fullback Michelle Wong, saw a fresh attacking set gifted to the Vipers as an easy right edge shift put Vipers Prop Lema Rota through a gap and over for the lead.

Canterbury failed to get out of their own half after some unlucky penalties and Vipers hooker Paris Paul dived over from dummy half to seal the win for Mid Central, 26 – 18.

Canterbury will face Akarana up at Auckland’s Pulman Park next Saturday while Mid Central face reigning champs Counties Manukau the following Sunday. All games are televised live on Sky Sport 4.