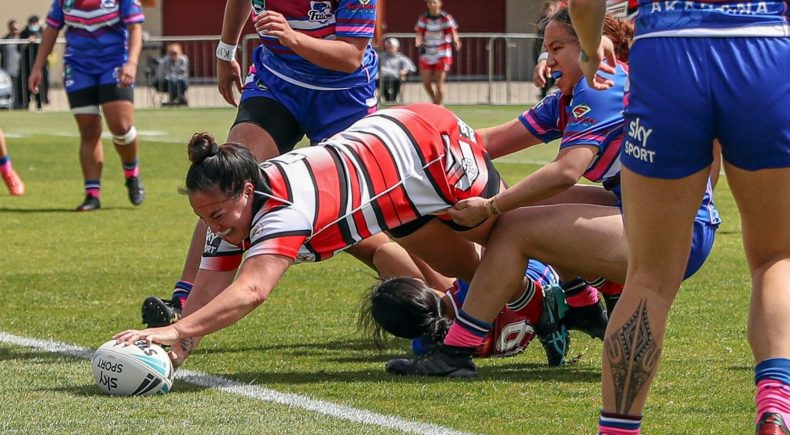 A promising matchup between the two powerhouse women’s teams began strongly, as some stiff Counties defence saw Akarana camped in their half for the opening set.

Counties capitalised on the momentum to cross over on their first set, an overlap on the left edge saw the ball move to winger Alexis Thompson who went over with ease. The conversion was missed to open the scoring early on at 4 – 0.

Akarana’s kick-off soared for a ten-and-out, the Falcons were in prime territory to even up the score, a wayward final option kick saw Counties let off the hook.

Counties looked strong early spreading the ball at every available opportunity and making up for errors with tough defence. Much of the early section of the game was spent deep in Akarana territory, even as Akarana right-winger Katelyn Vaha’akolo was given space down the edge she was stopped soundly by fullback Amber Kani.

The Stringray’s took control of the first half with speedy play the balls contributing to lengthy metres gained on offensive sets. Despite early dominance, the score remained at 4 – 0 with 15 minutes left in the first half.

The Stingray’s doubled their lead late in the first half through Jonsal Tautari as she crashed over from close range. The try converted by Kere Mautua which brought their lead to 10 – 0.

Momentum was undoubtedly behind the South Aucklanders as in the ensuing set they marched up the field to score, this time on the right as a nifty backline move saw lock Christyl Stowers increase the lead to 14.

As the halftime hooter sounded Counties Manukau halfback Jonsal Tautari spotted space in behind Akarana’s defensive line and a left grubber kick saw her chase and touch the ball down for her second of the day. A successful conversion meant Counties’ lead was increased to 20 as they took to the sheds.

It was Akarana’s turn to start the half off strong as the kick-off was carried by the wind to allow them to regather the ball in great field position. Kiwi Ferns fullback Apii Nicholls needed only the smallest of gaps to post Akarana’s first points of the day. The score was 20 – 4 early in the second.

Akarana were unable to build on their momentum as mistakes in their half proved costly, Counties used their extended period with the ball in hand to cross over through a great solo effort by fullback Amber Kani, leaving the score at 24 – 4.

Mistakes were proving to be the story of the game as this time it was Counties with the error in their half leading to Akarana’s Clementine Varea crossing over to narrow Counties lead. The conversion made the score 24 – 10.

Yet again, a mistake early in the set led to a try, this time Akarana making a mess of a quick tap to gift Counties great field position allowing them to cross over on the left-hand edge. Geneva Webber this time increased Counties lead.

A great run from Counties captain and hooker Krystal Rota from inside her own half gave the Stingrays promising field position to poise their next attack. Krystal rewarded herself for her efforts by darting over for her first try of the day. The conversion was successful to bring the lead to 34 – 10 with 5 minutes remaining.

Counties Manukau finished off a strong performance with a great defensive set refusing to allow Akarana any extra points before full-time.

With little time remaining Counties Manukau took the ball 100m to cross over once again this time Maitua Feterika finding the chalk ending the game at 40 – 10.

Counties with an impressive showing against a talented Akarana Falcons team, dominating field position and capitalising on the opportunities awarded to them.

Akarana look to bounce back next week against Canterbury, while Counties Manukau attempt to go through the round robin undefeated against Mid Central.