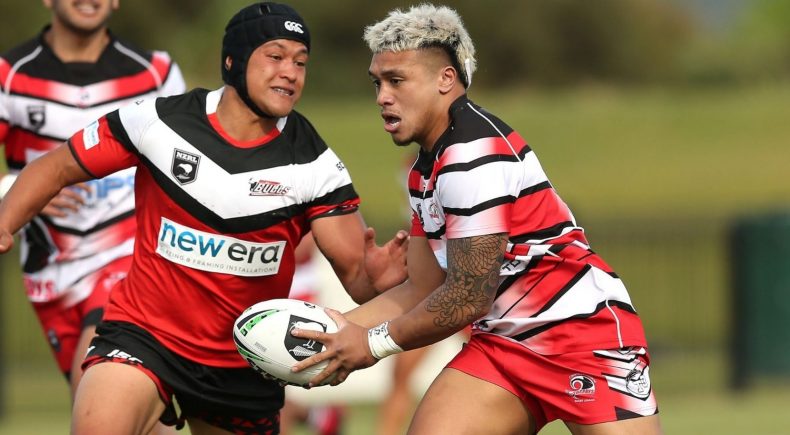 Nga-Puna-Wai Sports Hub hosted the first round of the NZRL Men’s Premiership for 2020 between the 2019 runners up, Canterbury Bulls and the Counties Manukau Stingrays.

Bulls’ winger Nicholas Evans opened the game with a try in the corner for Canterbury off a clever grubber from halfback Zach Riley; a successful conversion attempt made it 6 – 0 with six minutes gone.

Counties were quick to answer back with an overlap on the left edge as winger Semisi Sikei opened the scoring for the Stingrays, an unsuccessful conversion kept the Bulls ahead by two.

Counties fullback and veteran William Stowers showed his skill and pace stepping around the defensive line to gift the Stingrays their second try, back to back tries for Counties and a successful conversion put Counties in the lead 10 – 6.

Counties remained on the front foot with good metres through the middle until momentum shifted when they failed to find touch. The Bulls capitalised on attack as centre Vincent Paul jumped on a loose ball crossing over for Canterbury’s second. A successful conversion put the Bulls back in front by two.

An impressive run down the edge from Bulls’ winger Penitito Ilalio put Canterbury in great attacking position, however, the Bulls were unable to capitalise. The Stingrays quickly hit back and a misread in defence gifted an easy try to Counties five-eighth, Samuel Nati.

Drew Radich added the two extending Counties lead to four making it 16 – 12 heading into the sheds.

Samuel Nati then showed his individual brilliance with an impressive run off a mid-field scrum going over for Counties’ fifth and his second for the day. Back to back tries and another conversion from Radich made it 28 – 12 at the 50-minute mark.

Three penalties in a row and Ill-discipline from Counties put the Bulls back in good attacking position; halfback Zach Riley impressively caught his own kick gifting Canterbury a much needed four points and bringing it back to a 10-point game.

Handling errors from the Bulls saw opportunities go astray and the Stingrays wasted no time in answering back.

Counties winger Dredin McGee scored in the right edge corner for the Stingrays making it 32 – 18 with ten to go. The Stingrays’ speed in attack proved too much for the Bulls as Richard Holani and Wesley Tauti scored back to back four pointers sealing the win for the Counties Manukau Stingrays, 42 -18.

Counties will face reigning champions Akarana next Saturday at Pulman Park while the Bulls take on Waikato at Nga-Puna-Wai. All games are televised live on Sky Sport 4.