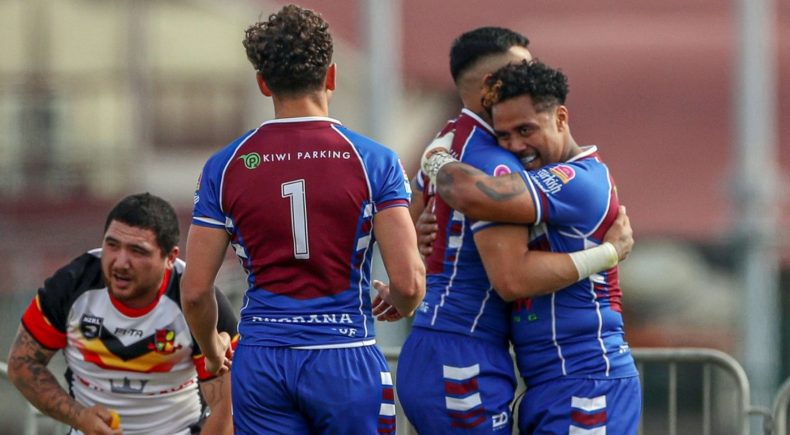 An aggressive opening set from Waikato ended in disarray as Akarana capitalised on their over-energy to steal a try; right centre Cole Waaka took an intercept in the Waikato half to race away for the opener, converted by Captain Francis Leger.

In the ninth minute, Akarana’s lead was doubled as fullback Matiu Stone-Dunn received a fifth tackle kick from his own half and proceeded to make space down the sideline finding support inside from halfback Jordan Te Aho to dot down under the posts then converted by Francis Leger.

A mistake from Akarana after the kick-off gave Waikato prime opportunity to get back into the game however, a mistake let the Falcons off the hook score remains 12 – 0.

In the 15th minute a sweet backline move from Akarana opened up space down the left flank from inside the red zone that allowed Sam Fa’apito to add to the growing score. The conversion was missed to leave the score at 16 – 0.

Akarana’s lead was increased to 22 as Jordan Te Aho re-paid fullback Matiu Stone-Dunn for his previous efforts as a nifty inside ball from the halfback placed him in a gaping hole down the middle of the park.

Midway through the half Waikato were gifted repeat sets in the Akarana red zone after multiple infringements, however, some great goal line defence from the Falcons saw them avoid giving up any points.

In the ensuing set Akarana stormed up the field opening up the Waikato defence, taking it 100m for Apirana Pewhairangi to cross for his first of the day bringing the score to 28 – 0.

Again, Waikato unfortunately failed to complete in their own half gifting the second intercept try of the game to Akarana right winger, Raymon-Ramoni Tuimalo Vaega

In the 36th minute substitute hooker Josiah Afu diced up Waikato through the middle eventually finding former Warrior and Titan Leivaha Pulu as Akarana increased their lead to 38.

A clinical first half from the Falcons saw them head to the sheds up 38 – nil on their fellow North Island counterparts.

Waikato began the second half impressively with their third forced drop out from a kick-off but history repeated itself as they once again failed to capitalise on prime attacking position.

After multiple repeat sets on the Akarana goal line Waikato finally found daylight as Waka Heke Sweet was placed in a divine hole by Waikato half Mikaere Beattie who then converted the try to bring the score to 38 – 6.

An Akarana dropped ball deep in Waikato territory was picked up by Tumatauenga Te Koi to speed down the field only to be caught short of the line by the Falcons cover defence. Waikato attacked the line earning themselves multiple repeat sets to only gift Akarana with their third intercept of the game.

Akarana then took the ball up the field completed with a great try down the right edge with Fa’apito, Leger, and Matti combining to send the captain over, increasing their lead.

In the next set after kick-off a short kick was mishandled by Waikato gifting Akarana a scrum on the halfway line, in the next play left winger Sam Fa’apito was then given just too much space down the left edge allowing him to scream away for a long range try. Leger unable to covert leaving the score at 48 – 6 with just under 20 minutes to play.

Waikato once again let great field position slip through their hands. After giving away a seven-tackle set Akarana capitalised on the depleted energy of Waikato taking the tap quickly and sending right winger Raymon-Ramoni Tuimalo Vaega on an 80m dart through the middle to score under the posts, further increasing the lead to 54 – 6.

A Waikato chip and chase inside the Akarana half backfired as the Falcons’ Fa’apito tok the chip, beat four defenders to end up in space in the middle of the field. He was caught by some great cover defence however on the next play there was too much space and fullback Matiu Stone-Dunn was given the ball down the right edge to cross over for his second.

The two Akarana props combine after Michael Ki broke the line in the Waikato half then offloaded to Chase Bernard to cross over under the sticks.

This brought the final score to 70 – 6 as Akarana ran away with the game to defeat Waikato.

Akarana will look towards next weekend as they take on fellow Auckland rivals Counties Manukau in what will sure be an exciting fixture, Waikato come up against a team in a similar position to them in Canterbury as they look to bounce back from this defeat.