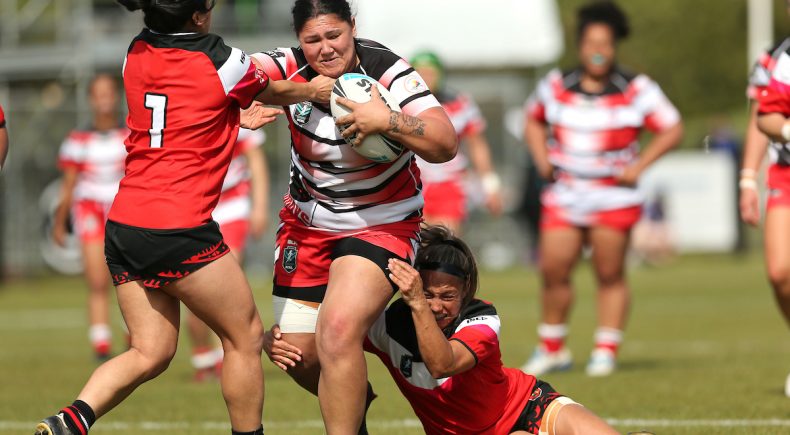 After a shaky start to the match exchanging penalties between teams, Counties Manukau’s Amber Kani stepped her way through the Canterbury side to take the first points of the match. Pahu Kani quickly followed her cousin to score her own try in the corner just three minutes later.

Platinum Marsters scored her first try on debut for Counties Manukau, the third try scored in just 11 minutes taking the lead over Canterbury 14 points to nil.

Kerehitina Matua stormed through the opposition with her own 70-meter run to score an excellent solo try for the Stingrays but was unable to convert her own try through the windy conditions.

Stingray’s dominance on the left edge continued with a second try for Pahu Kani.

Charlotte Butler crashed through the Canterbury defence to set up teammate Krystal Rota to score a try on the 28th minute. Butler then followed through scoring a try for herself a few minutes later to close out the first half of the match 30 – 0.

Counties Manukau started the second half with a barrage of tries. NRLW premiership winner and Kiwi Fern Maitua Feterika scored back to back tries within two minutes for the Stingrays. Canterbury were given opportunities to change the tone of the match but ill-discipline, some excellent defence from the Stingrays, and a try from Kararina Wira-Kohu shut down any momentum Canterbury were able to create.

With only 20 minutes to go in the match, Feterika scored her hat-trick for the Stingrays after an exemplary set. Points for the Stingrays kept ticking over through the remainder of the match, tries going to Alexis Thompson, another for Feterika, Rota, and Pahu Kani scoring another two tries.

The Counties Manukau Stingrays ease their way into the second round of the competition taking the win over Canterbury with a total of 16 tries for the Stingrays. The final score was 66 – 0.

The Stingrays will face the Akarana Falcons and Canterbury take on Mid Central Vipers in round 2 next weekend.