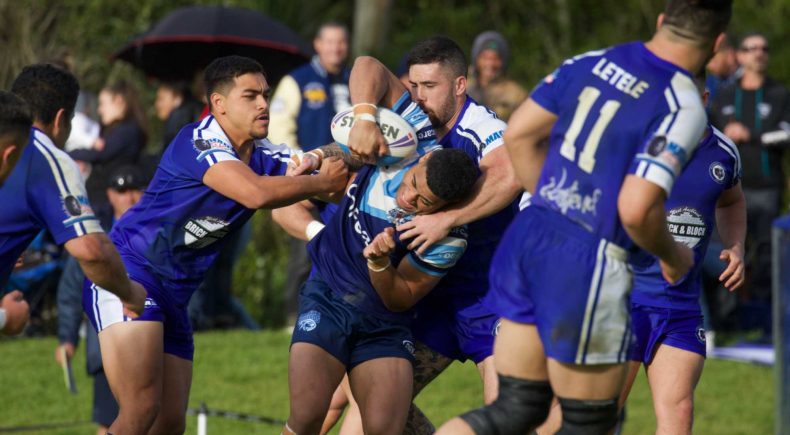 The Mount Albert Lions ran riot at Fowlds Park, recording a 88 point win over Papakura to continue their undefeated start to the season and claim the Roope Rooster challenge.

FOX MEMORIAL PREMIERSHIP:
Northcote 28 defeated Howick 6
Northcote remain undefeated through the opening month of the competition after powering past defending champions Howick. Centre Casey Smith scored a double for the Tigers, while back-rower Pierre Pili was among the standouts for Geoff Morton’s side.

Bay Roskill 32 defeated Mangere East 18
A big second half saw Bay Roskill past Mangere East for their second win of the year, after they had led just 14-12 at the break. Cheoneth Henry was the standout performer, clocking up more than 50 tackles in the middle of the park, while former Kiwi international Ben Henry led the Vikings well in the halves.

Mt Albert 94 defeated Papakura 6
Mt Albert remain unbeaten and with the Roope Rooster challenge in their possession after a big victory over Papakura at Fowlds Park. Fullback Fonitika Lelenga and wings Corey Seator and Nehumi Teu all scored hat tricks in the win.

Richmond 20 defeated Te Atatu 16
Richmond picked up their first win of 2020, edging past Te Atatu at home after scores had been locked at 12-all at the break. A second-half penalty and an Antonio Aufai try gave the Bulldogs the edge, with experienced forward Matti Tuitama a strong contributor in the win.

Glenora 8 lost to Otahuhu 18
Otahuhu earned their third win of the year via a gritty performance on the road to Glenora. It was a victory built through defence, and outside of conceding a try in either half the Leopards were excellent in their work off the ball. In a beaten side Glenora playmaker Kadiyae Ioka was strong, scoring a double.

Marist 14 lost to Pt Chevalier 24
Pt Chevalier were made to work all the way by a determined Marist outfit, who were led well by captain Adam Tuimavave-Gerrard. Pirates centre Harley Maynard scored two tries, while forward Patrick Sipley was outstanding for Pt Chevalier, who remain undefeated through the opening four weeks of the competition.

FOX CHAMPIONSHIP:
Papatoetoe 24 lost to Otara 30
Otara fended off a spirited Papatoetoe to remain unbeaten through their opening four games of 2020. Prop Sam Mahoni was strong for the Scorpions. Papatoetoe refused to go away and scored a handful of tries off Otara errors to remain in the contest.

Manurewa 38 defeated Ellerslie 34
A Nathan Simmons try and conversion with three minutes left to play got Manurewa past Ellerslie in a thriller at Mountfort Park. The Eagles had led at half-time before a much-improved effort from the Marlins saw them fight their way back into the match.

Manukau 62 defeated Waitemata 0
Manukau picked up a big victory at home over Waitemata, with back-rower Taunga Arama starring with a pair of tries and a number of quality carries. The Magpies were always in control and led 22-0 at half-time.

Pakuranga 18 defeated Hibiscus Coast 16
Pakuranga held on to beat Hibiscus Coast, turning an 18-12 half-time lead into an eventual two-point victory. Second-rower Tony Siligi was among the standouts for the Jaguars in the win.