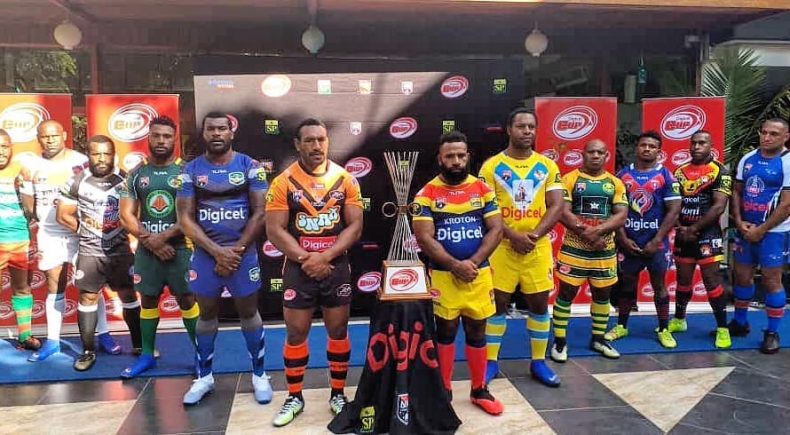 Defending Champions, the Lae Tigers, will have the opportunity to kick off their title defence at home when the 2020 Digicel Cup kicks off this Saturday.

Following the impacts of COVID-19, the 30th PNG National Rugby League Premiership season will run for only 11 rounds, with each team playing each other once before the traditional top six Final Series kicks off in late September.

In addition, matches for the first four rounds have been limited to the Lae Rugby League Ground and Sir John Guise Stadium in Port Moresby with crowds capped at just 30% of capacity.

These conditions will be reviewed by the PNG Rugby Football League in August, but with the reduced number of rounds, each match will be more important than ever.

Kicking off the 2020 Digicel Cup competition will see the Mendi Muruks facing the 2018 champions, the Goroka Lahanis, at the home of the Lae Tigers.

The Muruks, who finished 10th in 2019, have added Stanton Albert (Prop) and Junior Rau (Winger) from the Hunters to their squad, whilst the Lahanis have added Brendan Nima (Centre) and Nicky Hasu (Halfback) to bolster their otherwise relatively unchanged squads.

Goroka will head into the match as favourites after their strong form over the 2018 and 2019 seasons, with the Muruks aiming to be an outside chance for the Finals this year.

No team has benefited as much from the return of players from the Intrust Super Cup and UK Championships than the Gurias, who welcome as many as eight professional players into their 2020 squad.

Whilst normally the Gurias would be considered favourites against most Digicel Cup opponents, they face a Mt Hagen Eagles outfit who showed in their return season their ability to defeat almost anyone, as well lose to almost anyone.

Suspended for the 2017 and 2018 seasons, the Eagles finished 2019 in fifth with significant wins during the season over the likes of Rabaul Gurias (3rd) and Goroka Lahanis (4th) and draws against the Waghi Tumbe (2nd).

Already one of the powerhouse teams of the Digicel Cup in recent years, defending Champions, the Lae Tigers, have been boosted with the late recruitments of Edwin Ipape (Manly Sea Eagles) and Edene Gabie (South Sydney Rabbitohs) on top of four PNG Hunters players returning to the club.

The 2016, 2017 and 2019 Champions will come into the 2020 season as clear favourites, although will arguably face one of their toughest opponents in their opening game, the Waghi Tumbe.

The Tumbe, who have been a consistent top three teams in recent years, will be hoping 2020 is the year they can finally qualify for a Digicel Cup Grand Final.

The second game of the Port Moresby Double Header will see two of the newer franchise, the Gulf Isou (2018) and Central Dabaris (2019), go head to head.

On paper both teams will come into the fixture evenly matched, with Isou and Dabaris only adding one PNG Hunters player (Smith Siviri and Gairo Kapana) to their respective squads, and many of their 2019 players returning.

Last year’s competition runner’s up, the Hela Wigmen, will face a Kimbe Cutters side desperate to put behind their debut Digicel Cup season.

After only recording two wins in the 2019 season, the Cutters will be hoping PNG Hunter’s five-eighth, Justin Yoka, and prop, Steven Bruno, will help turn around the club’s fortunes.

The Wigmen, despite no major recruitments in the off season, will still come into the match in Port Moresby as favourites.

The Port Moresby will come into Sunday’s match as one of the big winners from the decision to cancel the Intrust Super Cup, with the Vipers picking up five contracted PNG Hunters (Enoch Maki, Brandon Gotuno, Shane Haro, Kevin Apo, Ase Boas) players for the 2020 Digicel Cup season.

With Stargroth Amean also returning from the Barrow Raiders to line up for the Vipers, the home team will come into Sunday’s match as favourites as they look to return to Finals football this season.