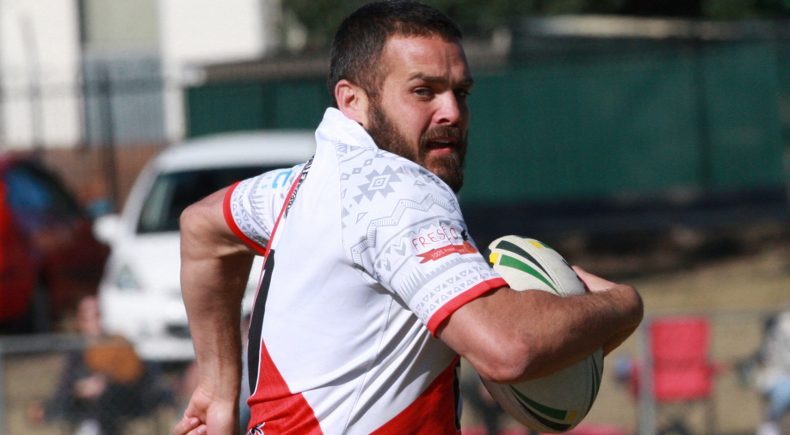 The lead changed hands five times and the teams exchanged hands in a fiery brawl as Peru beat Uruguay 34-30 in its 13-a-side international rugby league debut.

After two players were sent off and three were sin-binned following a melee in the 52nd minute, Peru sealed the game with a hat-trick to veteran hooker Jye Sommers (pictured) at Waminda Oval in Campbelltown.

The entertaining affair had Uruguay ahead with 20 minutes remaining, largely off the back of the three Papa brothers – Diego, Nico and Gabriel.

However, the Uruguayans were left to rue the absence of several other key players and a lack of fitness as they faded in the back end of each half.

The Gauchos would also be lamenting two disallowed tries in as many minutes, both called back for a forward pass from Adam Kungl to outside man and brother Ryan Kungl.

However, Peru was a deserving winner and also had two disallowed tries early in the match before Uruguay opened the scoring via Julio Toledo.

Uruguay’s Steve Clarke did similar for his nation, but too often inattention to handling and porous defence on the edges brought his team’s momentum undone.

When the brawl erupted at the start of the second half, Peru had just scored via teenager Josh Marrufo-Davidson to put their noses in front 20-18.

Before a conversion could be taken, play was stopped for over four minutes as Angel Morrison (Uruguay) and Isaiah Parker (Peru) were sent for early showers.

The two nations have had a history of willing contests in 9-a-side league, but this was their first chance to go head-to-head in the full version of the sport.

Ultimately it was two tries in succession from old-stager Sommers and another to Jayden Ibarburu which gave Peru a 34-24 lead that could not be bridged, despite two tries to Uruguay in the last 10 minutes.

Peru’s win was a turnaround on a week earlier, when Uruguay finished top of Pool B at the Latino Nines and the Incas finished last in the same pool.