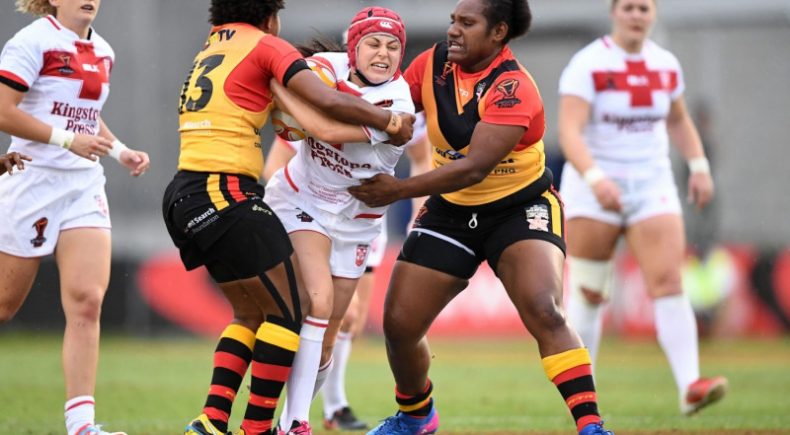 England Women’s Rugby League selectors have named a 24-player squad to prepare for their busiest ever winter, with an appearance in the Downer World Cup Nines in Sydney to be followed by an historic trip to Papua New Guinea (PNG).

Subject to contract confirmation, England will play two Tests against the PNG Orchids – the first at a Papuan Highlands venue on Saturday 9 November and the second a week later (Saturday 16 November) in the capital Port Moresby. The Post Moresby match will be part of a double-header also featuring Great Britain versus the PNG Kumuls – the final Test of the Rugby League Lions’ southern hemisphere tour.

The 24 – which will be trimmed to 16 for the Downer World Cup Nines tournament (18/19 October) – includes seven players from current Women’s Super League leaders Castleford Tigers – including Georgia Roche, who was named the first Woman of Steel last season.

St Helens supply eight players, including Emily Rudge who captained England in their last international against France last October, and Jodie Cunningham who is also one of the official ambassadors for the 2021 Rugby League World Cup. Rudge and Cunningham are two of nine survivors from the 2017 World Cup squad.

Caitlin Beevers, a try-scorer in Leeds Rhinos’ successful defence of the Coral Women’s Challenge Cup at Bolton, is one of five Rhinos representatives, while there are three from reigning Women’s Super League champions Wigan Warriors. Bradford Bulls’ Amy Hardcastle is the sole representative from those clubs outside the current top four.

Kevin Sinfield, the RFL’s Rugby Director who heads the England Performance Unit, said: “This is a really significant tour, for the EPU and the England Women, but also for Women’s Rugby League and International Rugby League.

“Just as we were delighted to expose our England Knights players to the unique experiences and challenges of a trip to Papua New Guinea last year as part of the preparation for the men’s World Cup in 2021, this tour presents our women with a completely new challenge that can only help in their lead-in to RLWC2021.

“The double header at Port Moresby should be a fantastic occasion. It’s exciting for Great Britain to be playing a first Test in PNG since 1996, and great that England Women will also be making history.

“On behalf of the RFL I’d like to thank Reatau Rau and the authorities in Papua New Guinea, British High Commissioner to PNG Keith Scott, Jeremy Edwards from the Rugby League International Federation and Sport England for their hard work and support in helping us to make our ground-breaking vision a reality.”

England’s 24-player squad, including their Women’s Super League and community clubs (where appropriate), and international caps, is as follows. Asterisked players were in 2017 World Cup squad.