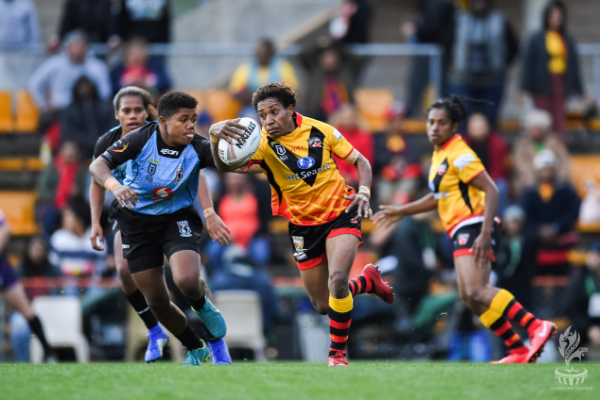 History will be made in rugby league 9s at the Samoa 2019 XVI Pacific Games, with a women’s event being contested for the first time alongside the men’s competition over two days at Apia Park Stadium from Monday 8 July.

The Papua New Guinea, Fiji and Samoa teams include players who participated in 13-a-side test matches for those countries two weeks ago – Fiji’s 28-0 defeat of PNG in Sydney, and Samoa’s 46-8 loss to the Kiwi Ferns in Auckland.

However, Samoa will be boosted by the addition of two hugely experienced Kiwi Ferns and NRL women’s players, Maitua Feterika and Luisa Gago, who have opted to represent their Samoan heritage in this event, making Samoa among the medal favourites in a tough-to-predict competition.

The PNG and Solomon Islands teams comprise players residing and playing in those countries, and this will be the first ever women’s international rugby league event for the Solomon Islands. All the other women’s teams include some players based in Australia and New Zealand.

Tokelau’s entry is a huge boost for a country that has never competed in Rugby League 9s at the Pacific Games. Their team comprises a mixture of players based in Tokelau and New Zealand who have been training together in Apia for several weeks under the guidance of former Samoa coach, Mike Felise.

Rugby league 9s kicks off at 1pm on Monday 8 July and will be broadcast and live streamed. Tickets cost $5 at the gate.