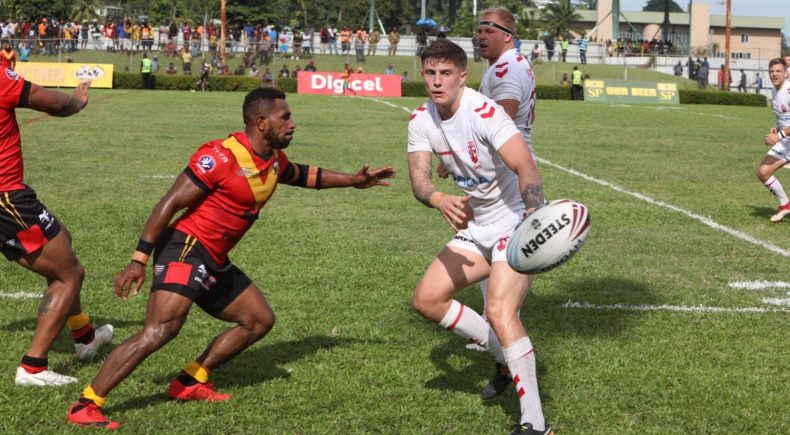 England Knights held off a fierce Papua New Guinea challenge to earn a 16-12 win in the first of their two international fixtures against the Kumuls.

Liam Sutcliffe, Tom Lineham and Tom Davies scored first-half tries to establish a 16-8 lead, and the Knights had to dig deep after the break in hot, humid conditions in Lae.

They restricted the Kumuls to a single try, meaning they will take a 1-0 lead into next Saturday’s second fixture in the PNG capital Port Moresby.

It was also a winning start to a historic day for England rugby league, as the first of three games in three different countries – with England’s women taking on France in Carcassonne at 2pm, and then the men facing New Zealand at the KCOM Stadium from 3pm.

A welcoming crowd created a fervent atmosphere for what turned out to be an extremely physical, defence-dominated opening encounter.

Both sides scored three tries – ultimately it was two successful conversions by Warrington’s Declan Patton which sealed the Knights win.

First blood, however, went to hosts after a cross field kick was tapped back into the hands of winger Brendon Nima, who scored in the corner; Watson Boas missing the first of all his conversion attempts.

Infused, the hosts went 80 metres again threatening the England line, the pressure extended when Tom Davies knocked on under the duress of the home defence.

The Kumuls’ over-enthusiasm spilled over when Nene Macdonald caught Joe Philbin with a late tackle, the visitors quickly shifting the ball to the left for Liam Sutcliffe to cross; Patton goaling to give England the lead.

PNG hit back, again thanks to dominant defence which caused England to cough up the ball, Moses Meninga crashing through three tackles by the posts, Watson Boas missing the eminently kickable conversion.

On the half hour, the home side were guilty of surrendering cheap possession in their own quarter, England shifting the ball to the left for Tom Lineham to cross.

The Warrington winger could have set up another score after breaking soon after but his pass eluded the supporting Chris Atkin.

Kruise Leeming made a difference on his introduction, livening up the speed of the play-the-ball and kicking an excellent 40/20.

Off the back of it, England switched the ball to the right for Davies to go over, Patton goaling to make it 16-8 at the break.

The hosts started the second half strongly, England defending multiple sets on their own line but cracked when PNG stand off Edwin Ipape danced his way through a tiring defence to score.

Patton was crucial kicking his side out of trouble as defences took over, England’s collective will and spirit increasing as the game reached its nervy climax.