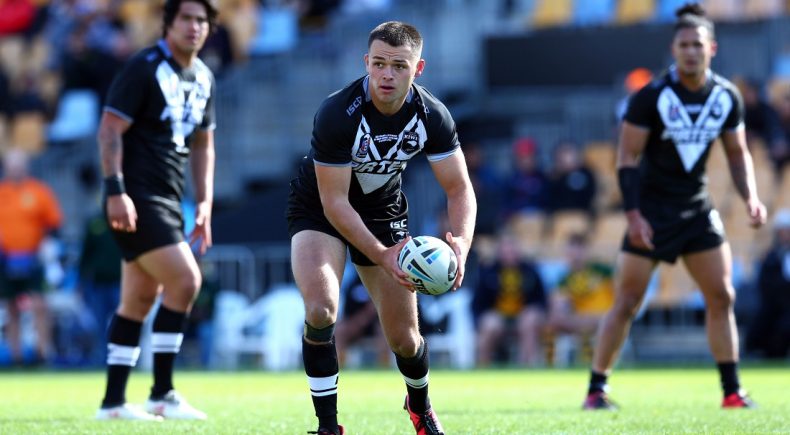 Clifford, who played six NRL matches for the Cowboys at the end of this season, showed why is considered the long term replacement for Johnathan Thurston with a man-of-the-match performance as the Junior Kangaroos ran in seven tries.

The signs had looked ominous for a comfortable Australian win when Melbourne forward Louis Geraghty scored in just the second minute but the Junior Kiwis hit back through tries to North Queensland hooker Sean Mullany and Warriors second-rower Issiah Papali’i to take a 12-6 lead.

Papali’i’s 16th-minute try is certain to feature on highlights reels as the lead up by halfback Chanel Harris-Tavita was as spectacular as it was unique.

Running to the line on the last tackle, the 19-year-old Warriors halfback flicked the ball behind him and kicked back over his right shoulder with a backheel action that Ronaldinho would have been proud of before catching and passing to Papali’i.

Brisbane forward David Flegler then gave a glimpse of why he is so highly regarded by NRL recruitment managers when he beat the Junior Kiwis defence with footwork to level the scores in the 21st minute.
Storm second-rower Tino Faasuamaleaui put the Junior Kangaroos ahead when he crossed in the 29th minute and Neil Henry’s team were in again three minutes later after Dragons centre Zac Lomax batted back a kick by Cowboys halfback Jack Lomax for South Sydney-bound fullback Corey Allen to score.

However, Cronulla centre Jackson Ferris narrowed the deficit for the Junior Kiwis to 24-16 at half-time when he swivelled out of a tackle by Lomax to score as the siren sounded after good lead up work by Chanel-Pavita.

Cowboys winger Enari Tuala ensured the flow of spectacular tries continued in the second half when he dived from outside the field of play to planted the ball over the tryline for the Junior Kangaroos in the 45th minute.
Warriors second-rower Joseph Vuna scored his last try before going on a Mormon mission to keep the Junior Kiwis in the game and St George Illawarra winger Steven Marsters scored their fifth try in the 65th minute.

Faasuamaleaui and Tuala completed their try scoring doubles to secure the 40-24 win for the Junior Kangaroos.