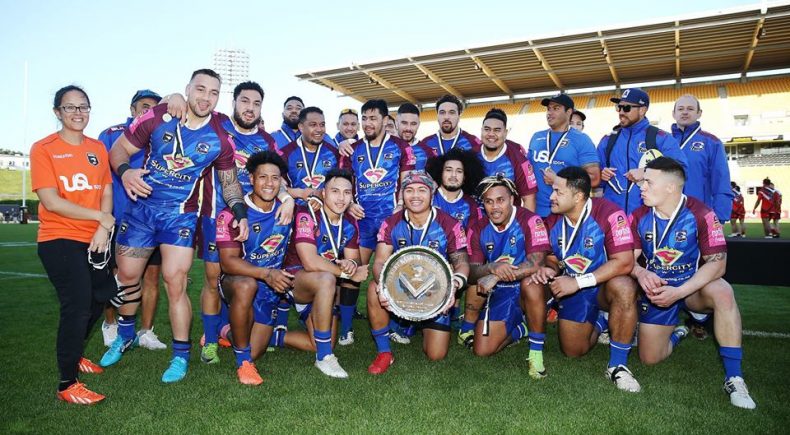 Counties Manukau Stingrays Coach Spencer Taplin would have been a happy man watching his side score off the first set. They may have beat Akarana in round two 32-22 but Akarana boasted defending champion status heading into the grand final.

However, a try and a conversion minutes later to the Akarana side put them out in front 6-4 thanks to a successful conversion. Akarana backed that up with another try soon after but this time, were unsuccessful with the boot.

Akarana birthday boy, James Taumata then chimed in with a try of his own which captain Francis Leger successfully converted, score 16-4. Dylan Tavita added to the try-fest and again, that was converted by Leger.

Then came David Bhana crashing through the middle under the posts to extend Akarana’s lead to 28-4 followed by another Leger two pointer.

The answer to Counties’ prayers came when winger Emiliano Mikaele crossed off the back of a classy run through the right edge of Akarana, the two points coming from half Drew Radich with the scoreboard reading 28-10.

The South Aucklanders looked poised for their third try moments later but were caught in a double movement as Halalilo went to score.

An Akarana drop goal from Dylan Tavita sealed the first half in what was a very smart end to the first 40 minutes, the halftime score reaching 29-10 in favour of Akarana.

Straight out of the sheds and it was Akarana at it again with the birthday boy James Taumata crossing for his second try, their lead stretching to 35-10. Counties replied shortly after with another try from Halalilo, score 35-14.

Counties came up short several times on the cusp of getting across the chalk but as soon as Akarana got the ball, captain Francis Leger was in.

It seemed to be a game of seesaw, as sure enough, Counties piped up with a try for themselves closing in on Akarana, 39-20 with 15 minutes to go.

But just as Counties came to the party, Dylan Tavita scored another for Akarana off the back of several counties mistakes where the ball bounced just in time for Akarana to pounce, a successful conversion sending Akarana out in front by 15 points with five minutes to go on the clock.

Five minutes proved to be plenty of time for Akarana to go again with Kitiona Pasene scoring right in the middle of the posts, successfully converted to end with a final score of 51-20 to win back-to-back National Premiership titles.

Waikato also maintain their position in the National Premiership after beating Northland 48-18.