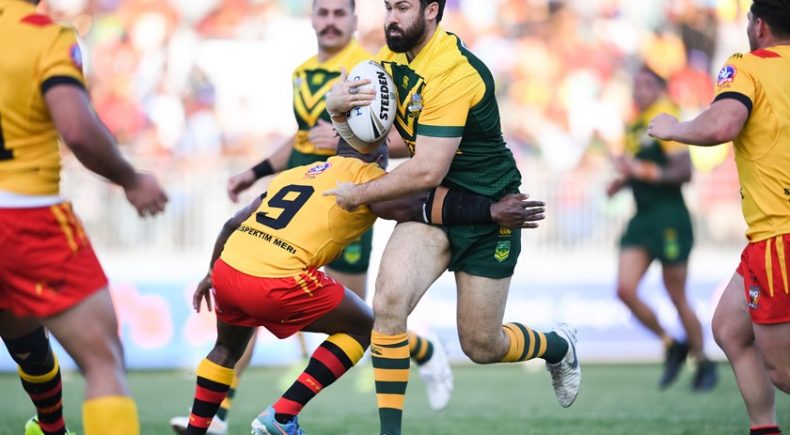 The Australian PM’s XIII overcame scenes of chaos, which saw players running from the field to escape a fan invasion, to seal a 34-16 victory against Papua New Guinea on Saturday.

The match was brought to an abrupt halt midway through the first half when thousands of Papua New Guineans began pouring on to the field, sending the Aussies rushing back to the sidelines as almost half of the 14,007 fans in attendance rushed on to the playing surface.

“At first I was a bit scared,” Jake Trbojevic said.

“But they just love their footy – they just wanted to shake our hands. At first everyone was a bit worried trying to run off the field but it was harmless.”

The match was stopped for almost 10 minutes before officials and police managed to escort the thousands of fans back to their seats.

“I didn’t know what was going on with all the fans running on the field. A lot of commotion and the coppers were on the field and the next minute people were spread everywhere. It was pretty scary. That’s just part of it. They enjoy their footy. They just wanted to get on the field and touch you,” Trbojevic said.

It is believed the stampede was sparked by a group of fans who believed the light tower in one corner of the field was about to collapse.

“I was pretty scared to be honest,” Zac Lomax said.

“The boys started heading back to the sheds. But at the end of the day, it shows how much respect these people have for you. They look up to you. If we can give back the slightest thing, that’s our job done.”

The tower remained standing, but many on the opposite end of the field took the opportunity to get up close and personal with some of the game’s biggest names.

“The cloud movement behind the lights made them look like they were shaking,” Australia coach Mal Meninga said.

“It looked like it might fall down but it was just because of the clouds. They mistook that … you can’t blame them. If I’m sitting in the crowd and I’m thinking the lights are going to fall on me I’m jumping on the field too. You can’t blame them for them.”

PM’s XIII captain Daly Cherry-Evans, who scored a double, was one of a few Australian players that didn’t rush back to the bench.

Instead, he hugged and high-fived the adoring fans.

“When they were running out they were smiling,” he said.

“They weren’t running out of fear, they were running out of happiness. I knew nothing was wrong. I thought I would give some people some high-fives. It was an amazing PNG experience. Something I’ll never forget. It added to the whole experience.

“While it may have halted our momentum, that goes to show the love they have the love for rugby league. That’s something I’ll never experience again. You have to take it for what it’s worth. While it did have an effect on the game, this weekend was much more than a game, so it was okay.”

Cherry-Evans, who will partner Cameron Munster in the halves in the Test matches against the Kiwis and Tonga in Auckland over the next fortnight, was one of Australia’s best in a team mixed with experience and youth.

Nick Cotric, who is on the verge of State of Origin honours, scored the first try of the game before Cherry-Evans combined with Tyrone Peachey to send Jake Trbojevic over.

Cherry-Evans then sliced through some feeble defence for his first try. He repeated that feat soon after.

Australia didn’t have it all their own way, with Canterbury’s Rhyse Martin pouncing on a Lachlan Lam grubber to notch up the home side’s first try on the stroke of halftime.

It didn’t take long for Australia to open the account in the second half, with Corey Allan capitalising on a Kumuls error to score the easiest of tries before the home side hit back through Kyle Laybutt to reduce the deficit to 30-12.

The crowd went ballistic when Justin Olam crossed soon after to reduce the deficit to two converted tries, but a Chad Townsend try against the run of play from the ensuing set ended the Kumuls’ hopes a come-from-behind win.