Turkey too strong for Japan in Emerging Nations 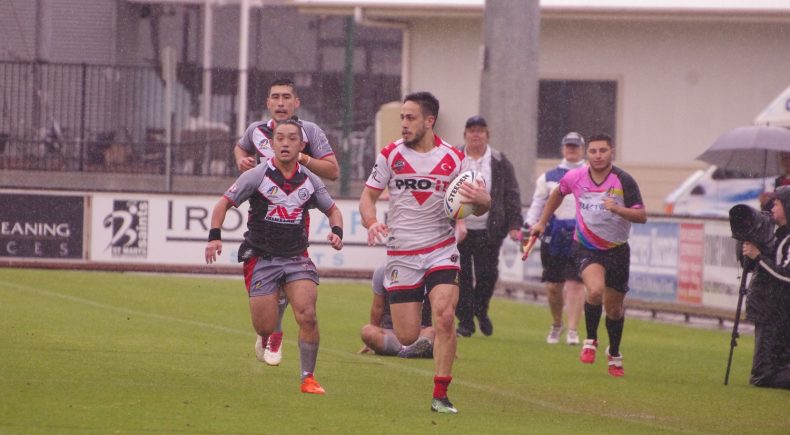 After a strong start to the Emerging Nations World Championship, Turkey were looking to continue their winning ways against Japan.

A mistake from Japan from the kick off gave Turkey a great opportunity early on and the Turkish Rugby League side made the most of the opportunity.

Ali Bokeyhan Surer went over from dummy half and converted his own try to give Turkey a 6-0 lead after 3 minutes.

Japan looked to be in for a long day from the outset with the fullback Sean Gabites dropping the ball off a kick, giving Turkey another excellent attacking opportunity, though Turkey returned the favour and lost possession, letting Japan off the hook.

Turkey split the Japanese defence and looked certain to score a few minutes later but Jansin Turgut dropped the ball just out from the goal line.

Despite it only being 6-0, the opening 15 minutes saw Turkey dominate possession though the Japanese defence held on and kept the big Turkish players.

Soon after Yusuf Dagdanasar – the man whose name means ‘the man from the mountain’ – strolled over untouched under the posts and Ali Bokeyhan Surer converted again to give Turkey a 12-0 lead.

The next set after scoring Turkey steamrolled their way up the field and Ali Bokeyhan Surer went over for his second from dummy half, converting his try again taking the lead to 18-0.

Japan earned themselves back to back sets but couldn’t capitalise on their opportunity.

The Japanese fullback was taken from the field for a HIA in the 25th minute and Japan gained a couple of back to back penalties to help them up the field.

A strong Turkish tackle dislodged the ball close to the line and another Japanese attacking set was wasted.

Turkey’s forwards kept steamrolling up field and made it difficult for the much smaller Japanese pack to contain them.

In the 29th minute Turkish centre Arda Dalcik crashed over the line only to drop the ball, letting Japan off the hook once again.

Turkey scored their 4th Try of the match off the back of a great run down the sideline by Alper Karabork.

It was Ali Bokeyhan Surer who scored again from dummy half, making it a first half hat trick and then converting his own try to make it a commanding 24-0 Turkish lead after 34 minutes.

Off the back of a strong set after a try Turkey went in again when captain Jansin Turgut sold a beautiful dummy and went over under the posts.

The Turkey forwards were exceptional in laying the platform in the first half in particular Adem Baskonyali just rolling through the Japanese defence.

Going into the halftime break Turkey lead Japan with a massive 30-0 lead.

The second half commenced and Japan looked to spread it wide early but were bundled into touch on the 40 metre line in Turkey’s half, giving the opposition good field possession early.

Alper Karabork gathered a Japan kick and broke the defence down the sideline scoring an excellent 60 metre try and celebrating with the ball boy.

Surer couldn’t convert from the sideline and the score remained 34-0.

Japan had another promising set in the Turkish team’s half but again they couldn’t convert the set into points with the Turkish defensive line too quick, putting an end to the Japanese attacking raid.

Turkey scored off a scrum feed in the corner through a great little offload from Aydin Salman-Cochran to the captain Jansin Turgut to crash over for his second try.

Surer missed the conversion once again and Turkey had a commanding 38-0 lead.

The Japanese defence couldn’t contain the Turkish forwards who continued to stroll up field and Adem Baskonyali scored a very well deserved try in the 57th minute and the score really started to blow out of Japans control.

Ali Bokeyhan Surer managed to convert the try to give Turkey a 44-0 lead.

Japan really struggled getting out of their own half with the Turkish defence pushing them back on every tackle.

Turkey crashed over in the 70th minute through Enes Erten and with the successful conversion from Surer, Turkey lead 50-0.

Presley Salman-Cochran appealed for a Try in the 74th minute after toeing the ball up field but the referee denied the Turkish player what would have been an excellent try.

It wouldn’t be long until Turkey went over again when Ata Doruk Celikutan split the Japan defence and passed to Alican Acar who then passed back inside to Celikutan to score in the corner.

Surer couldn’t convert from the sideline and Turkey lead 54-0.

Turkey crashed over for one last try and bringing up the double for Enes Erten and with Yusuf Dagdanasar taking the kicking duties and slotting it over.

Turkey were just too strong for Japan today running out convincing winners 60-0.