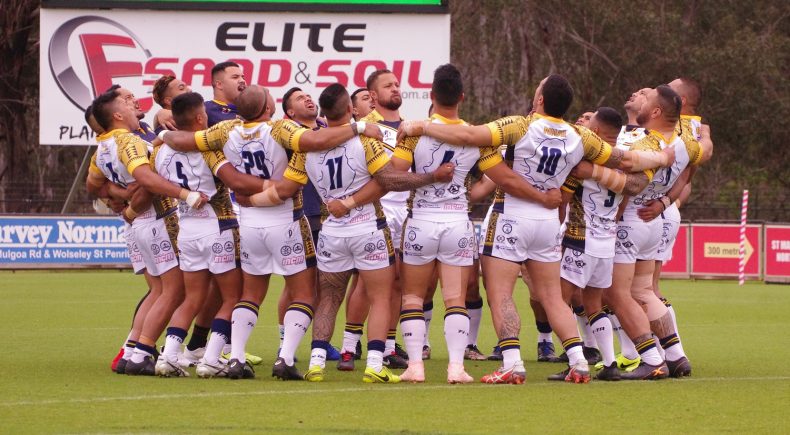 Day two of the Rugby League Emerging Nations World Championship got underway at St Mary’s Leagues Club in Sydney, with Malta looking to make it back-to-back wins while Niue were looking to get their campaign off to a flying start.

With the ground a bit slick, and some big boys on both teams, it would be a bruising affair and Niue would come out firing on all cylinders.

The forward pack for Niue would provide some barraging runs to give them the field territory early on, with a mistake by Emmanuel Sultana gifting Niue a set from close range.

One penalty and one play later, George Lolo would bash his way through two defenders to score right next to the left hand post to open the scoring on seven minutes.

The try was converted by Eddy Paea to make it 6-0.

Niue would nearly go in again, with a kick coming back into the hands of Niue.

The ball was spread out wide, and Cyruss Payne looked certain to score in the right hand corner.

It would take some incredible last ditch defense from Malta’s right hand edge to scamper back and drag Payne towards the sideline to regain possession.

Niue would dominate in both attack and defense, hammering the Maltese attack to force errors and leave them to kick from their own half in every set. That would pay off on Niue’s next attacking set, with Latrell Schaumkel grubbering for himself and getting a perfect bounce behind the Malta line to score.

Eddy Paea would make no mistake from twenty metres out to make it 12-0 in favour of Niue after sixteen minutes.

Niue would once again have the Maltese defense on the back foot, and Eddy Paea would make the most of this with a beautiful bomb from twenty out towards his left edge.

Malta looked to have it covered, but Justice Utatao would leap well above the pack to take an overhead mark and grab the third try of the game.

Eddy Paea would covert his first difficult kick to make it 18-0 with just over twenty minutes gone in the first half.

That would wake up the beast of Malta that was seen on Monday against the Philippines.

After being gifted a set of possession from a Niue attacking penalty, Tyler Cassel would first break through and be taken down in a textbook goal line tackle from Schaumkel, then he was on the end of a grubber from Adam Campbell to give Malta their first points of the game.

Niue would pay the price, with three players around the ball thinking that it would go dead in goal.

Nathan Benson would have the kicking duties yet again, and swung his attempt around perfectly to leave it at 18-6.

Both sides would have chances at the line, with Tyler Cassel nearly creating something out of nothing for Malta.

The very next set though, Niue would grab themselves another set and make the most of it.

Eddy Paea would send a flying cut-out ball to Jordan Tongahai, who would push through a few cover defenders and score to make it 22-6.

That is how it would stay at the break, with Paea missing his conversion attempt and Schaumkel being penalised for a double movement.

Tyler Cassel would be doing it all for Malta, saving their game with a crucial ankle tap and tackle to have Schaumkel down before he reached out.

Malta would come out in the second half and have all of the possession, but some handling errors would allow Niue off the hook as the rain started to come down in Sydney.

It would be a back and forth contest for the first fifteen minutes of the second half, with errors and penalties costing both teams a chance to score.

It would be an error that would give Niue the ball close to halfway, and they would make the most of it after fifty-eight minutes, with some great running and a touched cut-out pass seeing Justice Utatao go over for his second try, bringing the score to 26-6.

Eddy Paea would get a rest, and Jacob Samoa would miss his first conversion attempt to the left.

Jake Attard would have a long run a few minutes later for Malta, trying to go on the counter attack after a loose ball, but the Knights could not do much in attack thanks to some desperate Niue defense on the goal line.

With the ball getting rather slick and the rain getting heavier at St Mary’s Stadium, handling would become a major issue for both teams within their attacking set.

An error would finally lead to some points, with a fantastic break from Jake Scott seeing Tyson Muscat get the inside ball and slide over with seven minutes left.

Nathan Benson would hit the right hand post to leave the score at 26-10, with Malta needing a miracle to see a result.

It would be back to back tries for Malta, with Jake Attard running out of dummy-half and offloading to Tyler Cassel, who passed inside to Adam Campbell, who would dart over right next to the posts to make it a tantalising last few minutes.

Benson would convert to make it 26-16 with four minutes to go.

That would be it for Malta though, with an error just inside their own half confirming an upset win for Niue in their first game of the tournament.

Malta would stay on top thanks to their superior points differential, setting up a tantalizing game between Niue and the Philippines to decide who progresses out of Group A.