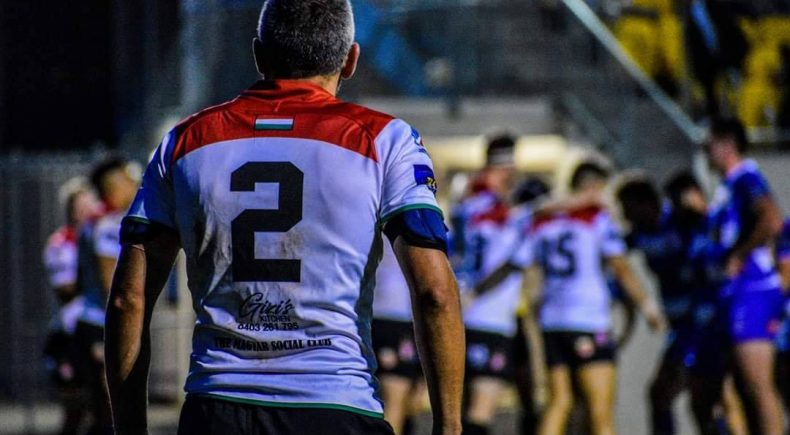 Off some hard tackling, Vanuatu forced the first of many errors, getting the ball close in attacking territory, though they were not able to capitalise.

Vanuatu gained some quality possession off the back of penalties and Andrew Kaltongga was able to step through, only to be held up over line after slipping up in the wet conditions.

After absorbing plenty of pressure the Hungarian team struck first through a great wide play to Nathan Farkas, which was then converted by Jared Farkas.

Hungary then began to mount an assault of their own with the ball, running down the blind side almost leading to their second try, though they gained a penalty and a repeat set instead.

The ensuing set they stretched Vanuatu and scored in the corner courtesy of Jayson Gerecs, though the conversion is unsuccessful

An error from Vanuatu gave further attacking possession to Hungary on the stroke of half time, which was followed by conceding a penalty .

Hungary elected to kick for goal from right in front, which was successful, taking the half time score to 12-0.

Vanuatu came out of the sheds with a renewed sense of purpose, setting up camp in the Hungarian half with repeat sets from forced dropouts and penalties.

Vanuatu didn’t make the most of their continued opportunities, easing their strangle hold on the momentum of the half after making unforced errors.

Hungary’s counter attack was almost instantly fruitful, with Jared Farkas toeing through the ball after a short kick, then collecting the ball just before the try line and, unfortunately for his team, he was penalised for a double movement.

Vanuatu then created space down the left edge for Amani Arutahiki to have a long run, parking his team in attacking territory.

An error from Hungary off a scrum in the next set gave Vanuatu a further chance and they took the opportunity, with a barnstorming run from captain, James Wood, shrugging off one tackle and taking four Hungarians over the line with him to score.

Andrew Kaltongga converted to make it 12-6.

Vanuatu made the most of their momentum, with James Wood making another enterprising run down the left edge, distributing the ball towards the sideline which finished with Amani Arutahiki scoring from a beautiful final pass.

The Vanuatu supporter base then erupted with joy as Andrew Kaltongga converted from the sideline to bring the scores level.

Vanuatu five-eighth, Alehana Mara, then put Vanuatu in front after slotting a simple drop goal, resulting in the first lead change of the match with just 6 minutes remaining.

From the restart Hungary manage to sneak the ball over the sideline, getting the ball back on the Vanuatu 30 metre line.

Paul Ivan shortly barges over in the left corner against Vanuatu, carrying two players over with him.

Jared Farkas converted from the sideline and the drama intensified with the lead changing again in the dying minutes.

Hungary spill the ball again in their next set and Vanuatu rush to pack the scrum.

Vanuatu fail to get to their kick which meant Hungary shut Vanuatu’s last play down.

Hungary then proceed to slow the play down, running down the clock and kicking the ball into touch to take the game 18-13.