Home > New Zealand > Warriors too strong for Auckland in trial

Warriors too strong for Auckland in trial 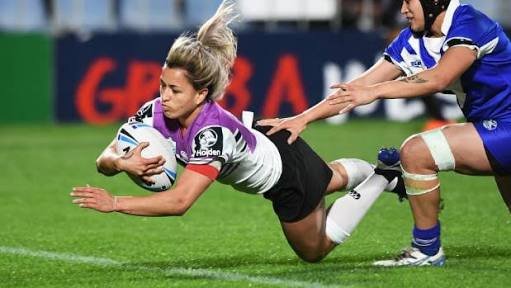 Resplendent in the just-arrived new Vodafone Warriors kit, the club’s trailblazing women’s team announced its arrival on the rugby league scene with a 32-4 win over Auckland in a trial at Mount Smart Stadium on Friday night.

The debut appearance in the Women in League round generated plenty of interest with a good-sized crowd arriving early for the first leg of a double header which was followed by the Vodafone Warriors taking on Newcastle.

The women proved too strong for Auckland as they started their preparation for the inaugural NRL women’s premiership.

They started with five first-half tries to lead 26-0 at the break and, despite a much-improved showing in the second 40, Auckland couldn’t find a way back into the match.

Manurewa Marlins centre Amber Kani opened the scoring on five minutes, after being put into a gap by veteran forward Lorina Papali’i, before the Luisa Avaiki-coached side struck twice in quick succession to make it 18-0 with the accurate boot of Apii Nicholls converting all three tries.

A breakaway effort from Tanika-Jazz Noble-Bell was followed by a Langi Veainu try down the left flank.

Hilda Mariu and Nicholls added further scores before the break to give the hosts a comfortable lead.

Auckland came out in the second half with new-found intensity and after just 12 minutes got on the board via a bumping carry from Kararaina Wira-Kohu, which saw her drag multiple defenders over the line with her.

Any hopes of a comeback were soon thwarted though, with interchange back Sarina Clark (Fiso) slicing through for her side’s sixth try just eight minutes later, with Nicholls converting to leave the final score at 32-4.

The two sides will meet again on August 25 – this time on Mount Smart Stadium No 2, as the Vodafone Warriors build towards the kick-off of the NRL women’s premiership next month.