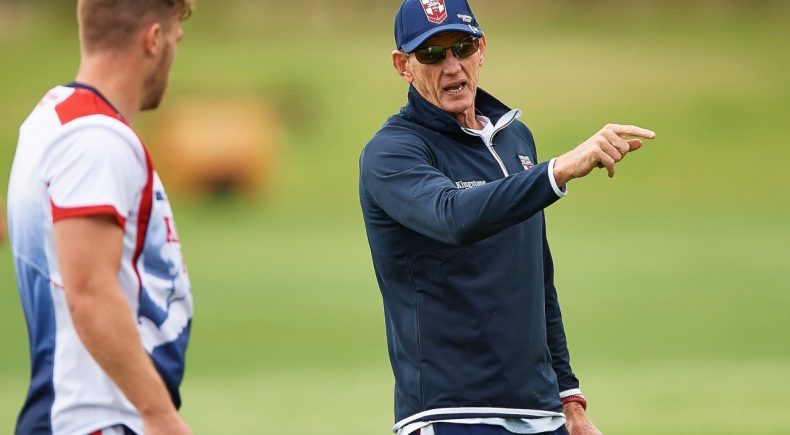 England head coach Wayne Bennett has selected his 19-man squad to take on New Zealand later this month and has included the uncapped trio of Hull FC’s Jake Connor and St Helens’ Luke Thompson and Tommy Makinson for the mid-season Test in Denver, Colorado.

Connor, who has shown sparkling form for Hull FC this year, was called up to the England Knights Performance Squad in March and has impressed the England coaching staff enough to earn his place in the senior squad for the trip to the United States.

St Helens prop Luke Thompson was also named in the Knights Squad at the start of the year and has been one of the in-form front-rowers in the Betfred Super League leading to his first call up to the senior England squad. Thompson’s teammate, Tommy Makinson will also be hoping for his first senior international cap and is one of five St Helens players travelling to Denver to take on the Kiwis.

St Helen’s lead the way with five of the thirteen Super League based players selected, with Wigan Warriors providing three of the squad as Sean O’Loughlin, John Bateman and George Williams all take their place in the final 19 man squad.

The squad also includes a recall for South Sydney Rabbitohs George Burgess, who will once again join his brothers Sam and Thomas in the senior squad, after missing out on selection for the 2017 World Cup. The Burgess brothers are three of six players joining up from the NRL and will be joined by James Graham, Elliott Whitehead and Gareth Widdop, who all played in England’s narrow World Cup Final loss to Australia last year.

Commenting on the squad, England head coach Wayne Bennett said: “I have selected a strong squad that I believe has the ability and talent to beat New Zealand in Denver. The game is going to be a tough one but we will go into it with confidence.

“We have been impressed with all the players this season and the three uncapped players deserve their call ups after showing their talent and determination both on and off the field. We have always been clear that the door to the senior squad is open to any player showing the form to be selected. The squad has a real mix of experience and youth and that will prove important during our time in Denver.

“Playing a mid-season test against Samoa last year proved invaluable and I’m sure this will be the same. It gives the team a chance to spend time together and me and my coaching staff to see how they perform together against one of the best teams in the World ahead of the International Test Series in the Autumn.”

England v New Zealand will be played at the Sports Authority Field at Mile High, Denver on Saturday June 23 (Kick off: 21.10pm BST) and fans in the UK can watch live from 9pm on BBC Two.