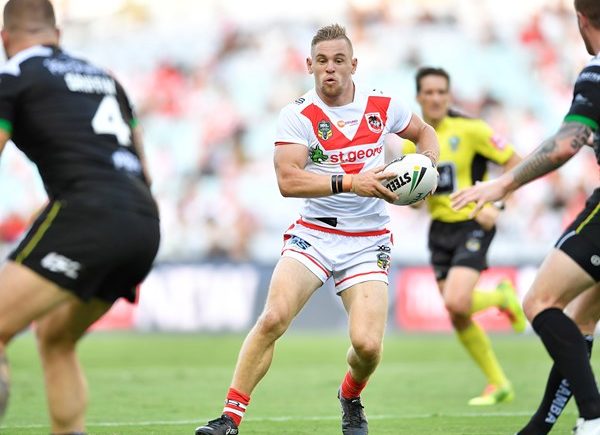 Matt Dufty took another step towards securing the St George Illawarra Dragons fullback role with an impressive performance in Saturday night’s 24-18 win over Hull FC in the first match of the international double-header at ANZ Stadium.

Dufty, who played six NRL matches last season, was given first shot ahead of Kurt Mann, Jai Field and Zac Lomax at the position made vacant by Josh Dugan’s off-season departure and he made the most of his opportunity.

Although he didn’t score, the 22-year-old constantly troubled the Hull defence with his speed and made two line-breaks, while running 200 metres from the back, to ensure himself another start in next Saturday night’s Charity Shield against South Sydney Rabbitohs at Mudgee.

“He is exciting and for the first game of the year, he did what he needed to do to get a run next week,” ,Dragons coach Paul McGregor said.

“He had a really good pre-season, it was much better than his previous one. He’s into his third one, so he’s a player we’re looking forward to seeing the best out of. He’s at a nice age, he’s put on a little bit of weight and speed is obviously his best asset.

“He’s a pretty confident kid. What he’ll get out of that is his conditioning is a lot better than anytime it was last year and carrying the extra weight was pleasing with his conditioning. After a tough pre-season to go out and play like that was good.”

Star halfback recruit Ben Hunt also gave a glimpse of what he will bring to the Dragons with a solid 72-minute performance, highlighted by his kicking game, and he combined well with captain Gareth Widdop.

However, it took the Dragons until the 77th minute to secure the win when Mann scored to send the large group of travelling Hull supporters home disappointed after a spirited performance by the Super League outfit.

Despite fielding a near full-strength team, the Dragons were on the back foot early and only the quick reaction of Tariq Sims prevented Sika Manu scoring the first try in the ninth minute when he knocked the ball loose from the Tonga World Cup captain’s grasp.

However, the reprieve was only brief for the Dragons after Albert Kelly crossed one minute later when he gathered a cross field kick from Jake Connor following a touchline break by the Hull centre.

The Dragons hit back in the 16th minute through Tim Lafai after prop Paul Vaughan offloaded near the Hull line to Sims, who simply caught, spun and passed for the left centre to plant the ball in the corner.

The try followed a break by Dufty on the other side of the field and the Dragons looked to be getting on top, with Sims almost scoring to break the 6-6 deadlock in the 23rd minute when he tried to latch onto a Ben Hunt banana kick in the in-goal.

Jason Nightingale put his team ahead five minutes later when he finished a passing movement featuring Hunt and Dufty and the Dragons led 10-6 after skipper Gareth Widdop missed the sideline conversion.

However, it was Hull who went to halftime in the lead after a brilliant side-stepping run by Kelly left Sims and Hame Sele grasping for air to score in easy kicking range for halfback Marc Sneyd.

Disallowed tries either side of the interval did not help the Dragons cause, with prop Jeremy Latimore catching a Widdop cross-field kick under the posts only for video referee Luke Patten to rule that Nightingale had got a finger to the ball and propelled it forward.

Vaughan was then denied a 44th minute try after Dufty chased a kick, reefed the ball loose from Liam Watts in the in-goal but hooker Cameron McInnes was ruled offside when he became involved in the tackle.

PNG winger Nene McDonald, who only came on at halftime, scored in the 47th minute after a sweeping left side play by the Dragons and then appeared set to get his second try just five minutes later only for the match officials to rule obstruction against Lafai.

With the Dragons playing their first match and Hull having already played two Super League rounds, including last weekend’s clash with Wigan at WIN Stadium, momentum shifted back to the English team and Watts scored a soft try to level the scores at 18-18 in the 56th minute.

But Mann snatched the late 24-18 win for the Dragons when he sliced through the defence three minutes from fulltime to score and Jai Field converted.

Hull coach Lee Radford said he had been impressed by Dufty, and he also predicted English prop James Graham would have an impact on the Dragons this season.

“Jamma didn’t play big minutes but he is going to be a gun for them this year, he is going to have a real positive impact on their team,” Radford said.

“The fullback is a real run threat, we probably got done over chasing on him a couple of times.”

Radford was pleased with his team’s performance and said if they made the trip to NSW again they would seek to play the Dragons first-up before taking on Wigan in a Super League premiership fixture as they did last week.