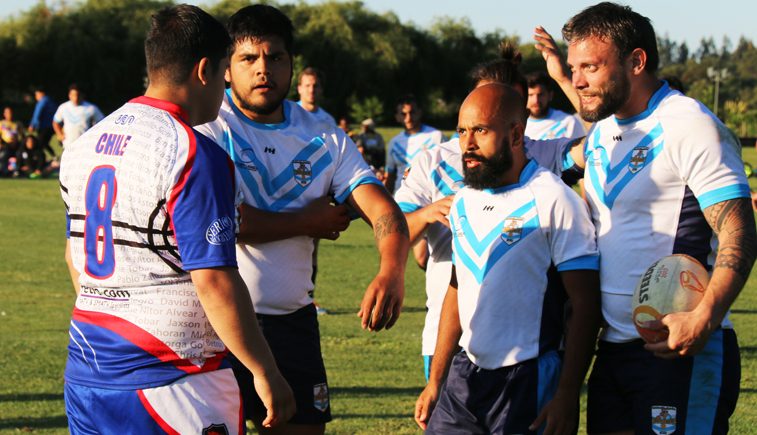 Emotions ran high as Chile affirmed its top standing in the Latin American region in a drama-charged 32-12 final of the Primer Rugby League Campeonato LatinoAmericano.

The best-performing Latin American team in rugby league for three years, Chile was still smarting after a 16-0 defeat to Argentina in a nines tournament in Miramar a year earlier.
The result had placed doubt on their credentials, and indeed, many were tipping the less experienced Argentines to triumph in the first 13-a-side international event held on Latin American soil.

But it was exactly that – experience in the sport – which counted most as Chile led from start to finish in a comfortable, though not dominant, display.

Indeed the Argentine players and officials let confusion and frustration at the rules get the better of themselves at various times, with the game halted several times to placate the angered Jabalis.

Throughout the game there was intense chanting, gesticulating and body collisions as the 13-man code gripped the city of Los Angeles, Chile.

Playing hooker despite normally being a running forward, Jonathan Espinoza scored his second hat-trick in two days to lead the home side to the win.

He had only 24 hours earlier crossed for another three tries as Chile beat Brazil 54-8 in the qualification match, while Argentina swept aside Colombia 36-4.

Possession in the final would have been at least 60 per cent to 40 per cent in favour of the Chilenos, who completed sets and directed play through the centre of the ruck before attacking the edges.

Argentina’s style was understandably more reminiscent of rugby union – a sport in which the nation is inarguably the supreme force in South America – but while it was entertaining, they also left themselves vulnerable at times.
Penalties and handovers of possession for impatient plays ultimately cruelled their campaign, despite looking dangerous each and every time they touched the ball.

Halfback Facundo Lizarzuay again signalled himself as a talent to watch and was a firm and creative director of the attractive Argentinian attacking style.

Chilean five-eighth Horvat played a similarly influential hand for his side and, aside from moments where he let his temper nullify his danger, he was a deserved winner of the Player of the Tournament.

Backrower Eduardo Wegener and nuggety Espinoza also would have been in the judges’ minds when selecting the recipient, while outside flyer Zecil Yao and prop Piero Diaz never failed to impress when the ball went in their direction.
The playoff for third place was a cracking match, where the lead changed three times as Colombia won 22-18 in another high-quality affair for two inexperienced outfits.

Brazil had hit the front 18-16 with 14 minutes left on the clock following three successive tries after halftime, reversing an earlier 0-16 deficit.

However rampant backrower Manuel Baene Murillo scored his third try of the game for Colombia as the clock wound down, securing a memorable first-ever win for Colombia under full RLIF rules.

Once more halves Sebastian Martinez and Nicolas Perico Diaz were the standouts for the Condores, though several lesser-known teammates improved rapidly in their short exposure at the competition.

Brazil, a late call-up after the withdrawal of Mexico, only had two days to prepare for the event and brought together players from four separate regions of their large nation.

Many players slept around two hours at a bus station before their Friday afternoon qualification match, following a succession of transport delays in bringing them 4000km across the continent.

Despite the adversity faced, there were numerous players who impressed from the country of 210 million people and the players were adamant Brazil could win the event if held under different circumstance.

Two women’s nine-a-side exhibition games were held on the same day as the final, with Argentina sneaking past Chile 6-0 in the first game via a try just before fulltime.

The impressive defence on show in the first match went somewhat amiss as the second game saw Argentinian women establish their authority with a 20-0 result to sweep the afternoon.

During the day over 100kg of balls, jerseys and boots were distributed to spectators, donated by individuals and teams from as diverse a selection area as Australia, England and Thailand.

Notable contributors were Latin Heat Rugby League, South Sydney Rabbitohs, Queensland Rugby League and Wests Mitchelton Panthers, who all donated full sets for teams to wear.
Another week of coaching and development work will continue to happen across the Latin American continent, with Argentina to be the focus in coming days.