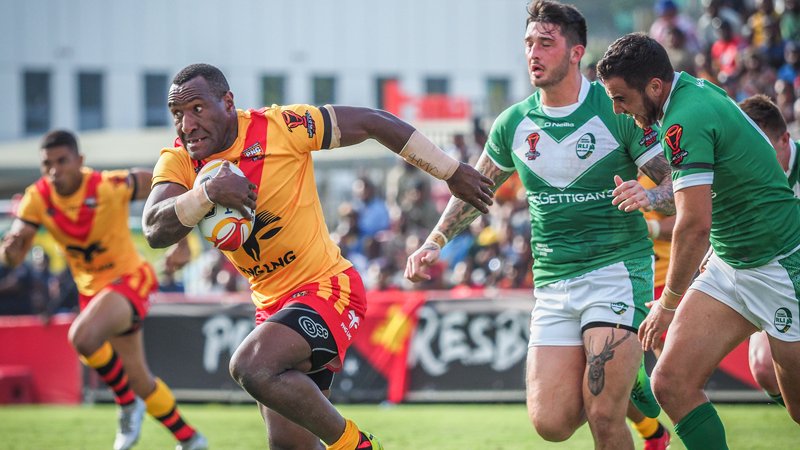 The PNG Kumuls have overcome a spirited Irish side 14-6 to continue their unbeaten start to the World Cup and virtually book their spot in the quarter-finals.

Kumuls winger Garry Lo was the difference, running for a game-high 200 metres, breaking 15 tackles and scoring a try.

His performance was a highlight in an error-riddled contest, with both sides pushing the pass and struggling to execute when it mattered most.

Leading 8-6 at half-time, PNG could not put the game away and it left the door open for an unlikely Irish victory.

Second-row forward Louie McCarthy-Scarsbrook came within inches of becoming an Irish hero, knocking on over the goal line with 10 minutes to go.

Seconds later, Kumuls winger Justin Olam thought he had won the match for PNG but the pass from Ase Boas was called back for being forward.

It was fitting that the match-sealing try came from an error, with Watson Boas toeing forward a wayward Ireland pass before regathering and scoring under the posts with two minutes to go.

His brother Ase converted from in front, giving the Kumuls a thrilling 14-6 win in front of a raucous home crowd.

Earlier, it was Ireland who opened the scoring through hooker Michael McIlorum to lead 6-0 after five minutes of play.

PNG hit back 10 minutes later courtesy of a barnstorming Lo run. It was a deserved try to the Kumuls who had dominated possession but struggled to execute in the early stages.

At 6-4 the game was begging for someone to stand up and take it by the scruff of the neck and that man was Nene Macdonald who showed his class to finish off an excellent PNG play.

The Kumuls dominated the rest of the half but silly errors prevented them from extending their lead, and although their fans would have been happy to be 8-6 up, their lead really should have been more.