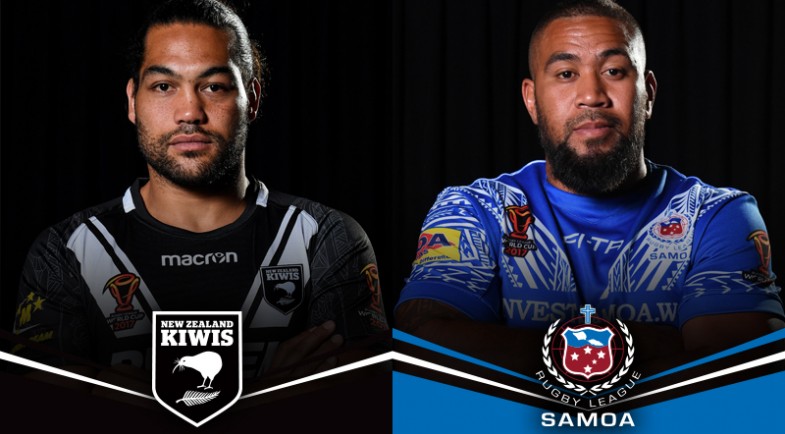 Saturday night at Mount Smart Stadium in Auckland will see the first of seven Rugby League World Cup 2017 games in New Zealand, as the home country takes on the vastly improved Samoa.

The Kiwis have named a new-look side featuring four debutants for the clash as they look to recover from the player defection saga they plagued their preparation pre-tournament.

Coach David Kidwell will be hoping to get his side off to a flying start and took the squad on an indifferent training camp in recent weeks, which involved players washing their own dishes and sleeping on cabin floors.

The “back-to-basics” style preparation has allowed the team get in touch with their culture and bring their younger crop of players into the national fold.

With a forward pack led by captain Adam Blair and fellow prop Martin Taupau, New Zealand will be out to steam-roll their Samoan opponents and given not even Jared Waerea-Hargreaves could make the 17, it’s fair to suggest positions in the forwards are going to be hard to hold on to – prompting plenty of effort on Saturday night.

Across the backline, the Kiwis won’t be short on those capable of bagging a try with fullback Roger Tuivasa-Sheck accompanied by Dallin Watene Zelezniak and Jordan Rapana on the edges.

The recovery and presence of Shaun Johnson from what was thought to be a year-ending knee injury sustained while playing for the Warriors midseason will be vital to the synergy of their attack.

Toa Samoa’s warm-up match against a Country U/23s side didn’t go exactly to plan with the boys in blue having to overcome a slow start to take the match 40-26.

The trip to Wagga Wagga in New South Wales for the game will have helped galvanised the squad made up almost entirely of players from the NRL.

Ben Roberts – Samoa’s most capped player – will start at halfback and comes into the tournament in arguably the best form of his career after helping guide Castleford Tigers to their first League Leader’s Shield in the club’s 91-year history.

The 32-year-old will be partnered in the halves by Joseph Paulo, who helped take the U.S.A to a quarter-final in the 2013 World Cup. Having played most of this season with Cronulla’s feeder club, Newtown Jets, Paulo will be looking to make a huge impact and has the proven capabilities to do so.

The halves combination shapes as Samoa’s biggest feature given neither player took part in their 30-10 loss to England in the Pacific Test back in May.

They have the benefit of having had coach Matt Parish in charge since 2013 and in the four years since, he will no doubt have worked out what works best for the side after they nearly beat New Zealand in the 2014 Four Nations – narrowly losing 14-12.

The match is sure to draw plenty of passion from both sides and the pre-game traditional war dances will not to be missed.