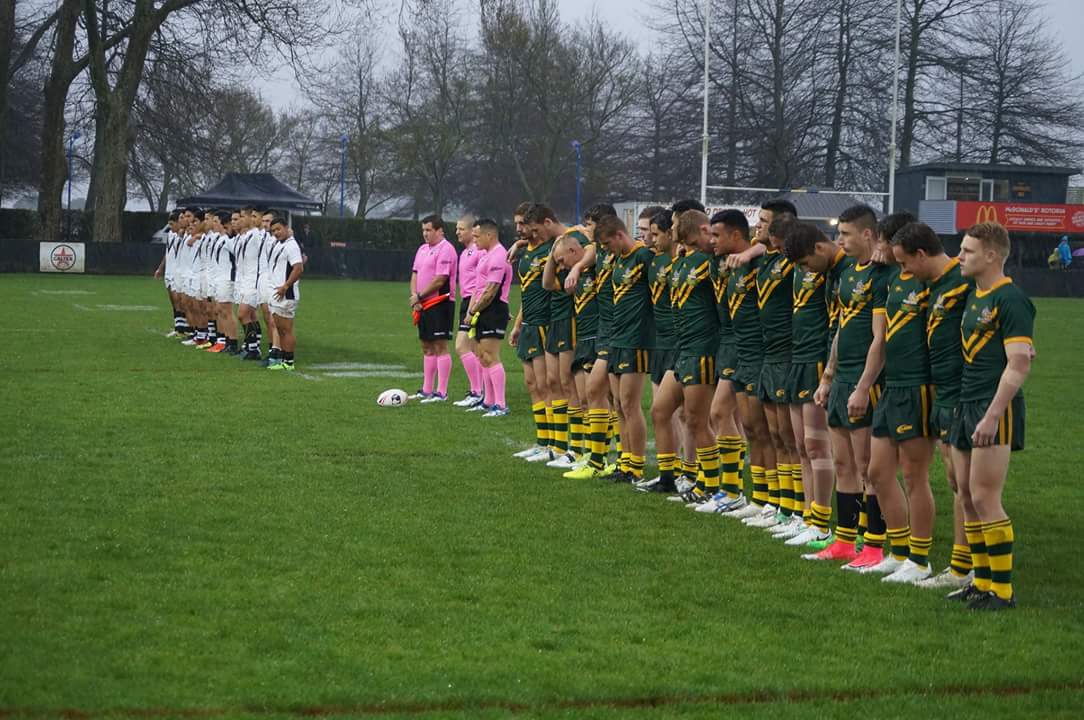 No energy was spared by the New Zealand Select 18s team who were defeated by a classy Australian Schoolboys in their encounter at Puketawhero Park in Rotorua tonight.

The winner at the end of the 80 minute bout would be the team that adjusted best to the torrential downpour – that was the Australian Schoolboys. The team from across the ditch managed to dominate possession in the first half leading to first points on the board for Ky Rodwell in the opening 15 minutes.

After preventing several more four-pointer attempts from the Australian Schoolboys, the battling New Zealand defensive line let in a try from James Roumano who took the score to 12-0, aided by another successful conversion.
Twenty-five minutes into the first half, New Zealand hit back with a try from Lewis Sio who crashed through a tight Australian defense.

However, the Australian Schoolboys weren’t silenced for long as their classy second-rower, David Fafita, crossed the line for their third try extending their lead to 18-6 following a successful conversion off the boot of Zac Lomax. Fafita’s outstanding attacking prowess saw him awarded Most Valuable Player for his side at the post-game award ceremony.

After being awarded a penalty minutes before halftime, the Australian’s took the two points with Zac Lomax continuing his 100 percent success rate at goal – New Zealand head into halftime trailing 20-6.

The second half started in a similar fashion to the first with the Australian Schoolboys’, Luke Huth, scoring in the opening ten minutes. A third successful conversion from Lomax had the visitors in front by ten points, 26-6.

Then came New Zealand’s secret weapon. The minute South Islander, Seth Tauamiti, stepped on the field, his presence was known. His impressive physicality saw the impact player conduct several hit ups which resulted in a well-deserved try that was successfully converted by Baylee Bentley-Hape, score 26-12.
New Zealand’s momentum grew as they regained more of the possession that the Australian’s had held onto in the first half. A try to Dray Ngatuere-Wroe and another conversion to Baylee Bentley-Hape closed the gap to 26-18.

Despite being presented with a couple of opportunities on the Australians’ line, the boys in black and white struggled to adjust to the wet conditions unable to keep the ball in hand.

An incredible line dropout from the Australians that saw the ball hurtled all the way to the opposite end of the field had the New Zealand team back on defence. Their never-say-die attitude saw them turn the ball over with one more shot at a four-pointer. New Zealand’s Kayal Iro almost managed to tip-toe down the right wing but was caught in-touch moments before planting the ball.

Preventing one last try-scoring attempt from the Australians saw the score remain 26-18 at the full-time whistle with Australian Schoolboys Head Coach, Tony Adam, more than happy with the end result.

“It was an extremely physical contest where our boys were bombarded by a strong New Zealand attack – we also managed to adapt well to the wet conditions,”

“Our side did well to keep turning up even when the Kiwi boys came at them with seven repeat sets,”

“Before the match against the New Zealand 18s on Saturday, we’ll go away and reflect on our game structures, we’ve still got improvements to make before then,” he said.

The result may not have gone their way but New Zealand 18s Select Head Coach, Rangi Hiroti, was pleased with his team’s gutsy performance.
“I’m proud of how the boys fought back in the second half after the Australian’s controlled play in the first 40 minutes,”

“We applied a lot of pressure forcing turnovers and repeat sets to get us back in the game. To me, that goes to show that our boys put it all out on the field today” he said.

If tonight’s clash is anything to go by, spectators are in for an action-packed game on Saturday morning at Trust Arena where the Australian Schoolboys will come up against the New Zealand 18s black jersey team at 11.30am (NZT).