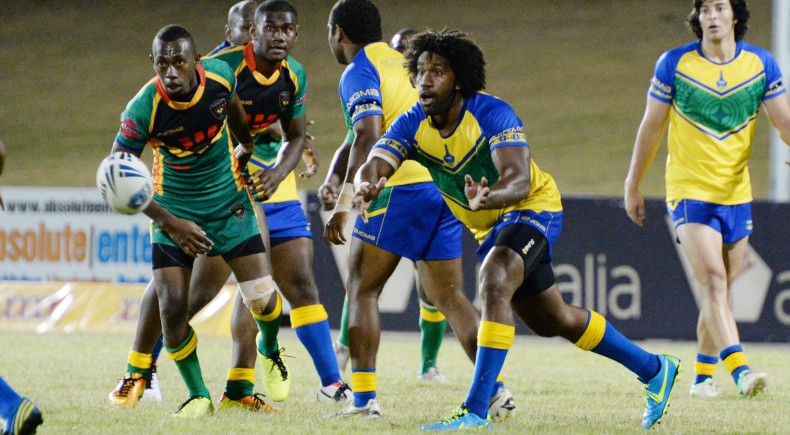 The Solomon Islands will host its first ever Rugby League Test Match when they host Vanuatu in the capital Honiara on Saturday 21st October 2017. The match will be the third Test between the Melanesian neighbours in what is turning into a fierce on-field rivalry. The Solomon Islands will be looking for their first victory after Vanuatu has scored two late come from behind victories in their 2013 encounter in Mackay (Australia) and most recent 24-15 defeat in Port Vila (Vanuatu) in 2016.

Solomon Islands Rugby League President Jerry Tengemoana commented “We’re very pleased to be hosting the Vanuatu Rugby League after they hosted us so well last year. We appreciate Vanuatu agreeing to come to the Solomon Islands so we can showcase Test Match rugby league to the people of Solomon Islands. Following participating in the 2015 Pacific Games and Test Match against Vanuatu last year, this will continue the momentum of the game both internationally and raise the profile significantly domestically.”

The game will be played in the lead up to Rugby League’s showcase event the 2017 Rugby League World Cup in Australia, New Zealand and Papua New Guinea. The World Cup will feature the top 14 teams in the world beginning on 28th October in Melbourne (Australia) and concluding with the final on 2nd December in Brisbane (Australia). Vanuatu is currently ranked 37th in the world and Solomon Islands ranked 40th in the latest world rankings.

Vanuatu Rugby League President Tom Carlo added “Part of our agreement with the Solomon Islands Rugby League in hosting them in 2016 was a reciprocal arrangement in 2017 for a return game in Honiara. Four of our previous five Test Matches have been played in Vanuatu as we’ve made a commitment and investment to promote the game locally, which the Solomon Island Rugby League also have and we’re more than happy to help them in this endeavour. We look forward to their hospitality in October.”

Both Vanuatu and Solomon Islands have been offered entry into the Emerging Nations World Championships but the Commonwealth Nines Championships will be subject to a selection criteria dependent on the number of applications.