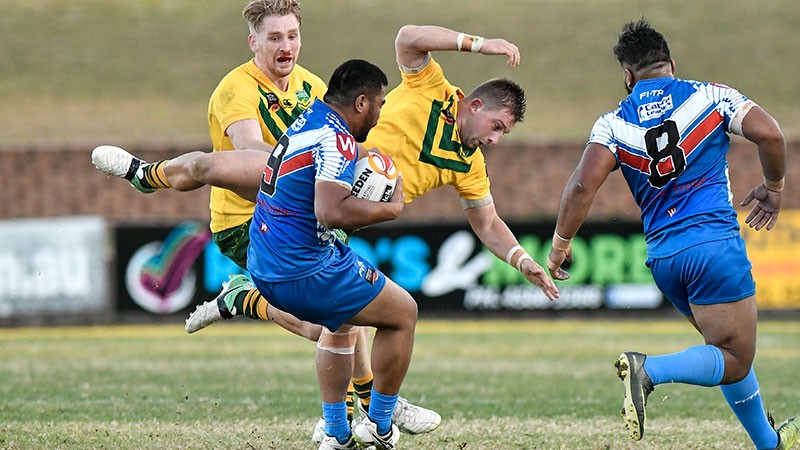 Australia have made it back-to-back victories and cemented themselves as the team to beat in this competition, running away with a commanding 68-16 victory over the Pacific Islands on Sunday evening.

Holding onto a handy 28-10 advantage at the break, Australia’s power through the middle-third and the class of their outside backs couldn’t be stopped as they proved too strong for a gutsy Pacific Islands outfit.

David Sheridan put in a remarkable individual performance crossing for 5 tries, while Jamie Anderson and Mick O’Keefe put in quality performances of their own.

Australia got off to the perfect start as a quick shift down the left-hand side allowed winger David Sheridan to find some open space, with his speed too much for fullback David Cossone as he streaked down the touchline and crossed for the first try of the afternoon.

Australia were building nicely with their forwards laying a strong platform to allow for some threatening attacking raids, and they soon found themselves on the scoresheet once again as Chris Ostwald busted his way over to score back-to-back tries.

An error off the kick-off from Australia invited Pacific Islands straight onto the attack to redeem themselves with a quick reply, and a classy backline movement saw winger Kodah Karipa athletically cross in the right-hand corner for their first try of the game.

Robert Val was unable to convert from the sideline with Australia taking an early 12-4 lead after 15 minutes.

Poor handling from Australia gifted Pacific Islands a wave of momentum following their first try, and Kolea Like took full advantage as he barged his way over from dummy-half for their second consecutive try.

An error in the ensuing set from Pacific Islands gave Australia the perfect chance to hit back after conceding two quick tries, with winger Mick O’Keefe capitalising on the early chance with his first try the afternoon.

David Sheridan was proving a handful with his nifty footwork and sheer speed causing havoc for the Pacific Islands defence, and he soon found his second try as he burned through some poor defensive efforts to streak away for a brilliant 70 metre try.

Mick O’Keefe converted from right in-front of the posts to take a 22-10 lead just after 25 minutes.

Brimming with confidence and enjoying a large share of possession, Australia found themselves constantly threatening the opposition goal line with a well-constructed backline movement eventuating to their fifth try and to take a strong 28-10 lead into half time.

Despite an array of handling errors from Pacific Islands, they were able to force their way back into the contest with as Kolia Liko made a bustling run through some tough Australian defence, but managed to get the ball down to give Pacific Islands a slim hope of a potential comeback.

Although fighting valiantly, their short burst of momentum was soon halted as David Sheridan continued his incredible showing – finishing off another clinical backline movement with a fighting finish before streaking away in the following set for his fourth try of the afternoon.

Another well-executed backline movement saw Mick Pearsall’s name added to the scoresheet, with Sheridan scoring his fifth of the day as he pounced on a perfectly placed chip kick and cross right under the posts.

Some dazzle dazzle football from Australia saw Jack Peoples finish off a brilliant team try before Jamie Anderson scored remarkably right after full-time through some more broken down play to finish off a thumping 68-16 victory and have Australia sit firmly on top of the table.