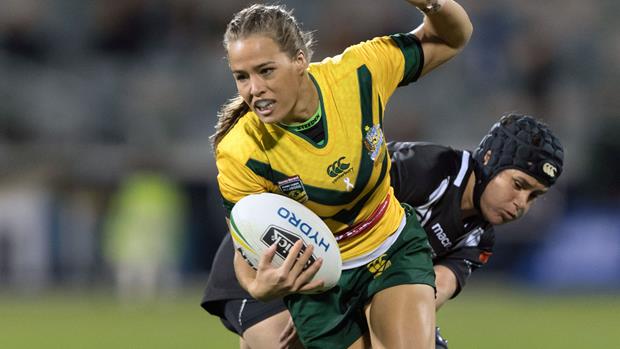 A rookie halves pairing and a winger handed an 11th-hour debut have helped the Harvey Norman Jillaroos to a convincing 16-4 win over the Kiwi Ferns in Canberra on Friday night.

With star fullback Sam Bremner ruled out after a head knock during the captain’s run a day before the game, Central Coast product Isabelle Kelly was called into the 17 and dominated from the Roos’ left wing with 130 metres and a stunning solo try.

Coach Brad Donald also rolled the dice on an all-debutant and all-Queensland halves combination of Simone Smith and Zahara Temara and the move paid off with each producing slick and skilful performances, though Smith’s night ended after 50 minutes due to an ankle injury.

While the Jillaroos dominated the opening 40 they were put under the blowtorch in a tough second 40 but produced a series of brilliant cover tackles as their edge defence held firm.

It was a tough opening 40 for Ferns skipper Sarino Fiso with the fullback producing two errors that lead to green and gold tries.

A cold drop inside her own 10 in the sixth minute allowed the Jillaroos to pile on the pressure with a goal line drop out and while the Ferns escaped on this occasion, a forced clearing kick from their own 20 saw debutant flanker Kelly burst through the line on a kick return to plant the ball under the posts.

The Ferns hit back in the 25th minute after applying some sustained pressure of their own and while prop Bunty Kuruwaka-Crowe was somehow stopped short of the line, her quick play the ball allowed winger Atawhai Tupaea to cross out wide from the next play.

The Jillaroos re-established their dominance when five-eighth Temara was on the spot to clean up a bomb fumbled by Fiso and shrugged through a final defender to hand the Jillaroos a 12-4 lead going into the break.

The Jillaroos continued to apply the pressure after the break and a Veainu fumble to concede a drop-out allowed Renae Kunst to smash through some soft defence at the line for a 16-4 lead in the 51st minute.

The Kiwis refused to fold however and launched a series of attacking raids midway through the half but the Jillaroos proved up to the task with several brilliant cover tackles to ease the pressure. The Ferns’ best chance was fluffed when Veainu spilled the ball with the line beckoning following a slick right-side shift.

The Jillaroos just couldn’t get out of the own end though and had to continue to defend their line, but proved up to the task with some impressive edge defence as they frustrated the Kiwis to close out a 16-4 win.