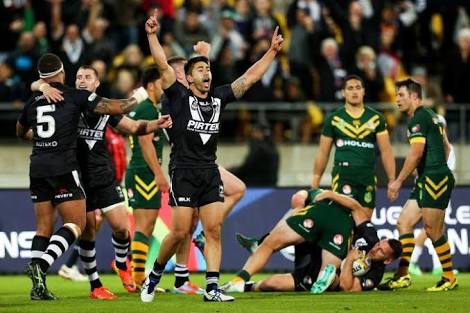 Canberra’s GIO Stadium will host the 2017 ANZAC Test between Australia and New Zealand, on Friday May 5.

The announcement was made today at the Australian War Memorial in Canberra by Deputy Chief Minister Yvette Berry, alongside Canberra Raiders’ representative players Shannon Boyd and Jordan Rapana, as well as NRL Ambassador Alan Tongue.

NRL Head of Football Brian Canavan said GIO Stadium would be a fitting venue for the 2017 ANZAC Test.

“The ANZAC Test is a very special match and one which is always incredibly competitive. This one will be no different,” Mr Canavan said.

“Canberra fans are always passionate so it will be great for them to be able to see international Rugby League at its best.

Kangaroos Coach Mal Meninga, the former Raiders Captain and Coach, said the match would be especially significant in a World Cup year.

“It’s important to win against the Kiwis at any time but on this occasion there will be the added incentive of the World Cup,” Mr Meninga said.

“The Kangaroos and I’m sure the Kiwis will be looking to put on the best performance possible to secure a win.

“It will be great to showcase Test football to Canberra.”

The 2017 ANZAC Test will be billed as a double header – with the Jillaroos taking on the Kiwi Ferns prior to the Kangaroos-Kiwis blockbuster.

“In 2013 a sell-out crowd of almost 26,000 packed GIO Stadium where the Kangaroos beat the Kiwis 32 -12 as part of our city’s centenary celebrations,” Mr Barr said.

“I have no doubt Canberrans will embrace the chance to see their heroes in action again.

“Canberra has a proud rugby league history and it was great see the city get behind the Raiders last season. I’m confident many of these fans will turn out in force to support the Kangaroos at GIO Stadium.”

Tickets will be on sale to Raiders members at 10am tomorrow (Tuesday, February 14), followed by the General Public at 10am on Wednesday (February 15).

Tickets will be available from nrl.com/tickets