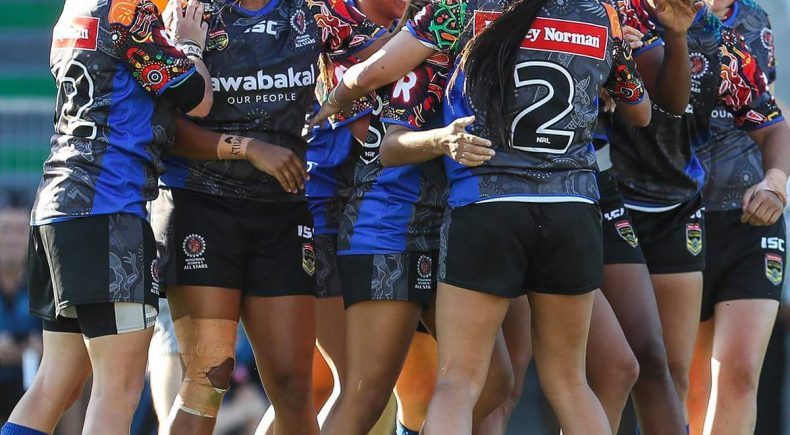 The Indigenous Women’s All Stars have beaten the World team for the first time with an impressive 14-4 win at McDonald Jones Stadium on Friday night.

Dean Widders’ side showed vast improvement to their defensive structures from previous years, holding out a number of attacking raids from a lacklustre World team.

All three try-scorers for the Indigenous team were playing in their first All Stars match while local product and Jillaroo Caitlyn Moran set up two of the three tries and halfback Simone Smith’s vision and dangerous running game earned her the player of the match award.

A highly physical first quarter was punctuated by some brilliant defence by the Indigenous team, who gave themselves too much to do due to a couple of errors but they were able to hold out the attacking raids those errors generated.

The match started to look like a war of attrition in the second quarter when Indigenous back-rower Kandy Kennedy has to go off in a medicab after suffering a horrible injury when her leg was caught underneath her and opposite number Kody House in a tackle.

World All Stars lock Renae Kunst was also taken off for a concussion check.

The second quarter did provide the first points of the game; the try was started by a wonderful darting run from halfback Simone Smith. Her pass found a supporting Caitlyn Moran. The Newcastle local put in a cross-field kick which looked too long off the boot but was allowed to bounce inches inside the dead ball line by World halfback Maddie Studdon and a wicked bounce shot the ball back for a lurking Samartha Leisha to plant the ball down.

Moran’s conversion gave the Indigenous side a well-earned 6-0 half-time lead.

The opening minutes of the second half brought a second try to the Indigenous team when five-eighth Lavina Phillips showed great vision to grubber wide for winger Suvannah Connors to step back inside the sliding defence and score for a 10-0 lead.

Smith only just failed to latch onto a well-read intercept attempt late in the third quarter that would have all but sealed the result.

Protecting their 10-point advantage, the Indigenous side continued to defend resolutely and their desperation was evident in the efforts of Phillips who twice earned possession, once by diving on a loose ball and once with a one-on-one strip.

The final stanza saw some monstrous hits though both Tahlia Hunter and Karina Brown bounced up after being levelled by crunching tackles.

The punctuation mark came four minutes from full-time with some lovely ball movement; first a stunning cut-out ball from Bo De La Cruz put Moran into space before the centre’s slick pass-on put a debutant over for the third time in the match, winger Hunter’s four-pointer making it 14-0 with barely a minute to play.

The World team avoided the ignominy of a defeat to nil when they crashed over out wide as the full-time siren sounded.