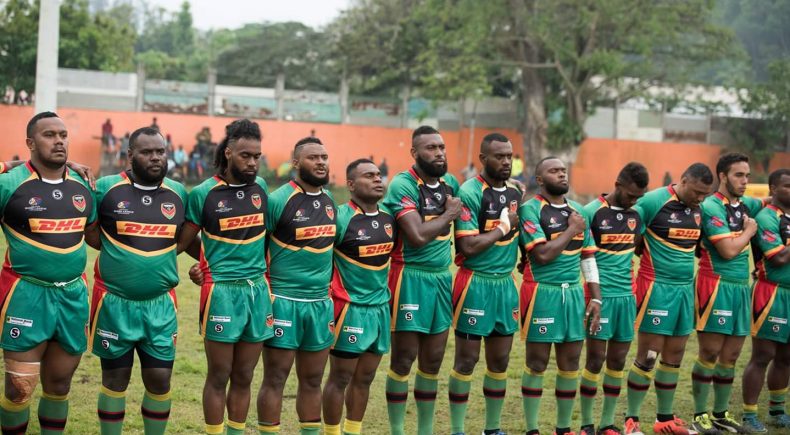 The Fr8 Logistics/DHL Vanuatu Rugby League (VRL) team has triumphed over the Solomon Islands Rugby League team in the Joe Bomal Carlo Memorial Test Match in Port Vila on Saturday 15th October. In pouring rain, the Vanuatu team twice had to come from behind of the gallant visiting team that employed at times some unconventional tactics.

The Solomon Islands showed their intention early on to play from in front by opening the scoring with a field goal to go up 1-0 within the first 10 minutes of the match. They then employed the same tactic to again kick another field goal and be up by 2-0 in the opening quarter of the match. Vanuatu showed scant regard for possession during the opening half and made mistake after mistake after mistake and kept gifting the Solomon Islands the ball in good field possession.

The toll eventually told as Solomon Islands scored late in the half to winger Dickson Tagini through a fifth tackle cross field bomb that caught Vanuatu short and resulted in a try out wide. A great sideline conversion from halfback Eugine Tepai, added to his two earlier field goals to put Solomon Islands up by 8-0 at the break.

Fr8 Logistics/DHL Vanuatu Rugby League coach, Lionel Harbin had a simple message at half-time “I just told the boys that if we held the ball we’d win the game. I think we only completed a few sets of six in the entire first half and the one opportunity we had in their half we nearly scored, so I knew we had points in us. Defensively I couldn’t have been happier as the team played with so much heart. For Solomon Islands to have all the possession and continually be attacking our line and only come up with one late try through a kick was extremely pleasing.”

The second half started much better for the Fr8 Logistics/DHL Vanuatu Rugby League team with hooker and renowned hair stylist for the world famous drama Love Patrol, Tonny Lui crashing his way over from close range on the fifth tackle as the defence rushed up on captain James Wood. The try next to the post was converted by halfback Dominique Sablan on Test debut and the Solomon Islands lead was cut to 8-6.

The Vanuatu comeback was in full swing when Patrick August, himself making a remarkable comeback, finished off a great move to score in the right hand corner. August was playing in his second Test match after debuting in Vanuatu’s opening Test match in 2012 against Greece and earning a contract with Souths Mackay where he unfortunately did his ACL and had to undergo a knee reconstruction that lead to a long road to recovery to again play for the national team. The unsuccessful conversion left Vanuatu with a 10-8 lead.

Against the run of play, Solomon Islands hit back with another fifth tackle try through a kick close to the line where several players converged on the loose ball only for Solomon Islands to come up trumps with a try next to the post to second rower Rodney Sinugeba. The easy conversion to Eugine Tepai put the Solomons up by 14 – 10 with 20 minutes to play. Shortly after the Solomons again kicked a further field goal to Eugine Tepai to lead by 15 – 10 with time running out for Vanuatu.

The Patrick August redemption story was in full swing when captain James Wood broke the Solomon Islands line and delivered the perfect cut-out ball to the former grave digger and now Municipal Police Officer in August who beat several players over the line to score in the corner. The unsuccessful conversion left Vanuatu trailing 15-14 with only 11 minutes on the clock.

The last ten minutes will go down in Vanuatu Rugby League history as the small but committed crowd braving very wet conditions saw the left hand side attack click into gear led by debutant and five-eight Malau Manaroto who laid on consecutive tries to the teams two Pastors in centre Lester Kalpukai making his Test debut and winger Sweeny Sablan who scored his second Test try for Vanuatu. Halfback Dominique Sablan kicked one of the conversions for Vanuatu to run out 24-15 victors, in the five tries to two victory.

The National Bank of Vanuatu Man of the Match was awarded to five-eight Malau Manaroto who controlled the game for Vanuatu with a strong kicking game and when the game was in the balance and needed to be won, set up the final two tries to lead Vanuatu to victory. Though his impressive offensive display was over shadowed by his crushing defence where he made several crucial try saving tackles and helped changed the game forcing several errors through his crushing defence. Manaroto will take home 25,000 Vatu from the National Bank of Vanuatu.

The Test match wasn’t the only fixture with a highly entertaining curtain-raiser between the Port Vila Fire Ants and Santo Boars thrilling fans earlier in the day. Port Vila were looking for their fifth consecutive victory, while Santo was searching for its first. It looked to be another Port Vila victory before a late surge from Santo saw them force a 30-30 draw for the teams to share the annual fixture. Just like the two teams, the two best players from either side couldn’t be separated and will share in the 15,000 Vatu Man of the Match prize from the National Bank of Vanuatu. Former National team squad member and Santo Boars forward Alfie Henderson was voted by the panel to be equal best on ground with Port Vila’s outside back Steeve Wells who spent the week with the National team before dropping back to play for the Fire Ants.

VRL President Tom Carlo couldn’t be happier with the results from both games, with the only dampener the weather “In terms of the actual results, the VRL couldn’t be happier with our provincial teams playing out a draw and then the national side surging late to claim victory. Obviously the weather affected the crowd which was only slight disappointment in a highly successful week. I’d like to thank everyone who made the week possible, especially the visiting Solomon Islands Rugby League team and all our amazing sponsors,”

The Solomon Islands Rugby League have invited the Fr8 Logistics/DHL Vanuatu Rugby League team for a return contest in 2017 in the Solomon Islands and both teams are continuing discussions so both teams can continue to play on the International stage and continue to grow and develop Rugby League in their respective nations. Both teams have also expressed an interest in playing in an Emerging Nations World Cup that is currently being discussed for November 2017 in Australia alongside the 2017 Rugby League World Cup being played in Australia, New Zealand and Papua New Guinea.