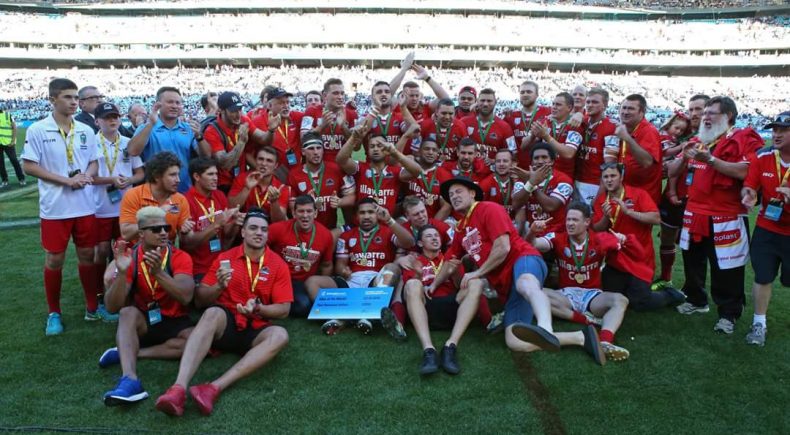 The Illawarra Cutters have dominated the Burleigh Bears to ensure their place as the best second-tier team in Australian rugby league following their 54-12 Intrust Super Championship victory.

The Intrust Super Premiership premiers were unstoppable from start to finish in the nine-tries-to-two rout of the Bears, where nine individual Cutters crossed the white stripe.

With the concept in its third year, the Cutters are the first New South Wales-based outfit to win the State Championship following Northern Pride and Ipswich’s past successes.

Nona was the star of the show for the Cutters and set the tone early with a 40/20 in the first five minutes. The Townsville Blackhawks-bound playmaker finished proceedings with three try assists and 18 points (nine goals from as many attempts).

While he may have thrown an intercept the set after his 40/20, Nona remarkably recovered the ball 30 metres down the paddock when he stripped it back from Burleigh centre Connor Broadhurst.

It led to the Cutters’ first try of the game when veteran front-rower Shannon Wakeman crashed over under the black dot with two would-be Bears defenders hanging off him.

While Siliva Havili and Kalifa Faifai Loa were denied try-scoring opportunities thereafter, it took another big effort from another prop – this time Damian Sironen – to help the Cutters score next in the 22nd minute.

Failed efforts from Bears duo Waqa Wanahi and skipper Jamal Fogarty to clean up a Havili grubber allowed Jacob Host to push the score out to 24-0 after the half hour.

A 30-0 half-time lead was set in stone by the Cutters when back-rower Chris Lewis pounced on a Nona grubber three minutes from the break.

The Cutters continued where they left off in the first 40 when Hutchison weaved his way over just four minutes into the second half despite suggestions of Milne obstructing two Bears defenders.

Havili buried his way over from dummy-half to help the Cutters reach the 40-point mark by the 53rd minute.

A towering Nona bomb caught the Bears by surprise three minutes later when winger Kurt Mann jumped above the pack to score the Cutters’ next try.

A barnstorming run helped Bears front-rower Josh Ailaomai score their only try of the game in the 61st minute.

But regular programming soon resumed when Taane Milne scored from dummy-half two minutes later, just moments after the Bears let the Cutters’ kick-off bounce out, to help add to win.