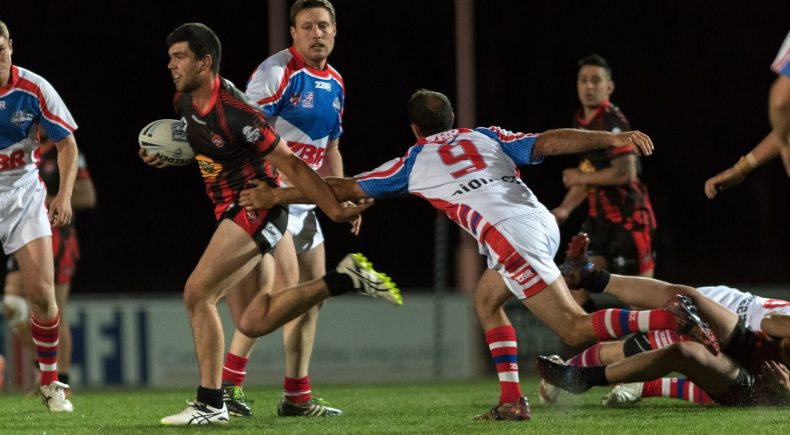 A willing first half in the Liberty Cup battle between teams representing Latin America and North America gave a glimpse of what could one day become a great rugby league rivalry.

After the first 40 minutes of action, the score was 18-4 to the CanAm Grizzlies (Canada and USA) over the GYG Latin American Heat.

To that point both territory and possession were well-contested, and although the Grizzlies still had the upper hand, the Latinos were not starved of scoring opportunities.

The second half was far more dominant however for the northerners, as superior fitness and defence saw them storm home to a 60-4 win at St Marys Stadium, west of Sydney.latin-heat_usacan-1925

The CanAm team contained two players from the last World Cup – Danny Howard and David Marando – plus a handful with a strong chance of figuring at next year’s tournament.

Chilean debutant Daniel Aguirre Acevedo was brilliant off the bench for the Latin Americans, while props Juan Carlos Carrion and Eduardo Wegener shouldered a heavy workload in defence.

“We tested ourselves, but it showed tonight we are not near that standard yet. That’s the reality,” Latin Heat coach Aaron Raper said.

“Credit to the Grizzlies on being the better team tonight, but there were some positive signs to build on if our players become better physically prepared and play more regularly.

“I understand Latin Heat has come a long way since it started in 2013, but we still haven’t identified a full 17 players who are playing to an Australian country level or equivalent on a weekly basis.

“There are exciting things happening domestically in Latin America and, as that gains momentum, there will undoubtedly be some great athletes unearthed.

“The other part of that equation will be having the funds to ensure those athletes are exposed to international opportunities and opposition.”

Chile has just finished hosting its first ever rugby league tournament, won by Mariman Negrete in an event that involved seven teams.

Argentina will host the Chilenos on November 12-13 in the Atlantic coastal city of Miramar in the first meeting between the two neighbouring nations in the sport.

Mexico continues to have sporadic rugby league competitions spread throughout the year, while a groundswell of interest has also been created in Colombia, Brazil, El Salvador and Ecuador.

“We could dwell on the result of the game, but our players are just as much advocates of the sport as they are competitors,” Latin Heat president Daniel Godinez said.

“Tonight they put the focus on the sport of rugby league for Latinos around the world and we’ve had messages of support come from a dozen countries or more.

“Yes, the score ended up against us, but it doesn’t tell a larger story about the unique circumstances that have brought each of our players together.

“In terms of growing rugby league internationally, we still achieved an objective.

“USA and Canada have about 30 years headstart on us with regular rugby league and if you look at say the example of Sri Lanka in cricket, it’s amazing how things can change in a similar period.”

Star Heat player Kevin McKenzie missed the contest through a broken hand suffered while playing with his club side Kawana Dolphins.