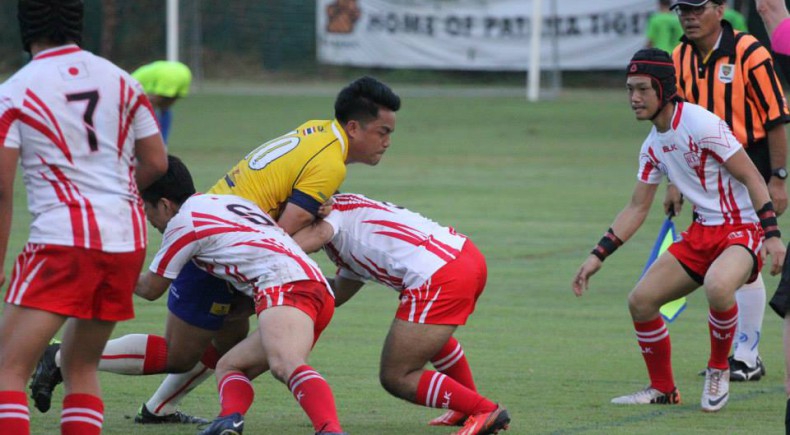 Thailand has won the return leg of the 2015 international series between the Thailand Stars and the Japan Samurais.

After winning the opening encounter 52 – 16 in Tokyo in April, Thailand were looking for an improved performance in front of their home crowd at Patana Sports Centre.

Both teams started cautiously in an effort to complete their sets and the defence was strong. An error from Japan enabled the Stars to attack the line but the Samurais defence was great and held on. However, after some repeat sets the Stars finally broke through when replacement prop Surawoot Sangnetr charged straight on to a pass with a strong run and crashed over for his first try for Thailand. Darryn Matthee converted.

The game stopped for a while when Japan back rower Amane Konishi was injured following an accidental head clash which caused a severe head wound that later required 27 stitches. At quarter time the score remained 6-0 to Thailand.

Early in the second quarter Japan suffered another setback when the other back rower Masatsugu Furusho had to leave the field with another shocking head wound.

With Japan down to just 15 players the game started to open up and the Stars halves of Tyler Chant and Darryn Matthee looking very dangerous. Matthee swooped on a Japan bat back following a kick and raced sixty metres to outpace the cover defence and score next to the posts. He converted his own try.

The Chant-Matthee combination struck five minutes later when Chant put a deep chip over the top where the ball bounced horribly for the Japanese winger and Matthee plucked the ball brilliantly out of the air to score. He again converted his own try and the Stars raced out to an 18-0 lead which remained at half time.
The third quarter was a tight affair with Japan battling on courageously with a number of injuries to their players. The Samurais were trying desperately to bust the Stars through the middle but the defence was strong.

Just the one try in the quarter which was brilliantly executed by the Stars. Chant ran to the line and threw an inside ball to hooker Kurt O’Brien who quickly tipped the ball on to fullback Sam Lynch who sped through the hole. Lynch swerved around the fullback and set sail for the line but was caught by the Samurais winger but could not hold on to Lynch who then planted the ball over the line for the try. Matthee converted the try from the sideline and Thailand were now leading 24-0.

After a number of successive penalties Japan scored after just three minutes of the final quarter when hooker Tao Sugano burrowed his way over. He converted his own try which reduced the margin to eighteen points.

Thailand were gifting possession to the Samurais as they continued to charge at the Stars defence but could not score.

Just before full time Stars half back Chant showed some great footwork to break the line and dive over for the final try of the game in which Matthee again converted.

At full time the final score was Thailand 30 Japan 6 giving the Stars a dominant victory.

Japan were tough and inspirational as they were down to the bare minimum during parts of the match and kept on giving. Best for the Samurais were Sean Kataoka-Gabites and Tao Sugano.