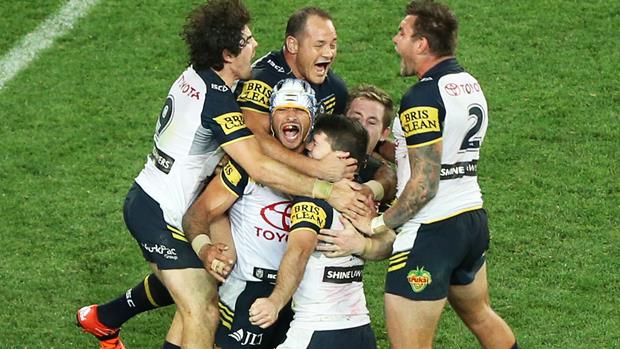 An extra-time Johnathan Thurston field goal has sealed North Queensland’s first ever premiership in a pulsating decider that will be remembered as one of the greatest Grand Finals ever played.

It came after Thurston had made us wait for him to claim his moment, hitting the goal post with a sideline conversion attempt to win the game after the full-time siren at the end of 80 minutes following Kyle Feldt’s last-second try to level the scores.

The fairytale had looked a very long way away as a frustrated Cowboys side repeatedly failed to drive home attacking chances in the second half as the clock – and Brisbane’s four-point lead – began to take their toll.

With the trophy appearing certain to return to Brisbane in master coach Wayne Bennett’s first year back in Red Hill, Cowboys five-eighth Michael Morgan – who had had a deeply underwhelming game to that point – finally clicked with one of his right-side raids, setting up Feldt’s try with a magic flick pass.

The crowd erupted at the drama as well as the knowledge that one of the greatest players ever to have laced on a boot was about to step up to the mark to claim his place in history.

It was quiet as a whisper when 82,758 fans held their breath as Thurston took an age to line up the shot. When he eventually did it started right in typical style before drifting back, drifting back… and just as Thurston raised aloft a fist in triumph the ball clipped the right hand upright and bounced back into the field of play.

Those 82,758 erupted in either cheers or anguished groans in unison but more drama was to follow as a towering Feldt restart floated down into the lap of Brisbane halfback Ben Hunt… who spilled it cold.

It was a cruel blow for one of the most improved and impressive players in the competition and nothing like what he deserved after an outstanding season and controlled the night well.

But the Cowboys were jubilant and set to take a field goal from the scrum. Spotting the danger Brisbane raced up and shut the play down but it was only a temporary reprieve as the Cowboys went left, then went right, then finally straightened to set again and this time Thurston made no mistake, slotting the one-pointer straight between the posts to send all of North Queensland into raptures.

“I love these boys. They’ve worked so hard

While nothing could match the high drama at the end of the game, the start was also scintillating and exploded into life shortly after kick-off.

After a hugely tense opening few sets where neither side gave an inch in a physical feeling out period, an error from the Cowboys immediately followed by a penalty looked set to hand the Broncos the first attacking opportunity of the game. However they strangely opted to take two points from 40 metres out in the sixth minute.

It mattered little one set later though; in the second play after the restart a deft and very late Adam Blair offload to Anthony Milford allowed the pivot to skip across field barely 10 metres from his own line, spy Kyle Feldt rushing up and take the space on offer to send it on to Jack Reed.

The centre’s draw-and-pass handed bullocking young winger Corey Oates a free long-range run to the line for the opening four-pointer of the match and 2-0 had become 8-0 in the blink of an eye.

The frantic passage of play continued with Matt Gillett’s lost ball straight after the resumption. From the scrum, speedy North Queensland hooker Jake Granville dummied from the base of the scrum then accelerated through half a gap, finding centre Justin O’Neill in support to close the deficit back to two in just the 10th minute.

As the half wore on Brisbane struggled to get out of their own end; while Matt Scott didn’t even register a carry until the 12 minute his fellow bookend James Tamou produced a powerful opening half-hour spell, bending the line with most carries.

The NSW prop earned his reward when the Broncos failed to clean up a Thurston grubber in the 24th minute. Tamou produced a perfectly timed run at the line and the pass from Granville out of dummy half had to be just as precise to allow the 26-year-old to spin out of Sam Thaiday’s attempted tackle to plant the ball next to the posts and earn his side the lead for the first time.

If the Cowboys’ four pointers were coming from well-executed set plays the Broncos’ were opportunistic and they reclaimed the lead when Thurston came up with an uncharacteristic error inside his own half, losing control in a tackle with some assistance from Andrew McCullough.

Gillett raced away with the loose ball, breaking the line then sending Reed over to help his side back to a 14-12 advantage.

The second half was more dour than the first after Brisbane again started with a penalty goal, Jordan Kahu taking the shot with Corey Parker off the field after Morgan was penalised for holding in the tackle having just saved a try with a great effort on Reed.

The Cowboys struggled for penetration in the middle with their starting props and hooker on the bench for stretches while Michael Morgan, Kane Linnett and Kyle Feldt were each having something of an off night in attack and with their ball-handling.

Despite that Brisbane still had to absorb a huge amount of pressure at their own line as errors from Cowboys kicks handed North Queensland repeat sets.

Four-time Dally M medallist Thurston was busy and scheming in attack, playing both sides of the field and slotting into left- and right-side shifts, but was becoming increasingly frustrated as a combination of incredible Brisbane goal line defence and his own side’s lack of polish brought them unstuck.

As the half wore on Brisbane’s two penalty goal advantage looked a bigger and bigger gulf to breach for an increasingly frazzled Cowboys outfit.

Although the Broncos at times looked out on their feet they never lost control with Hunt and McCullough repeatedly plowing hard grubbers into touch, forgoing yardage in favour of winding down the clock and earning a breather and using their advantage.

One left-side attacking move saw Linnett drop the ball with the line open; on the right Morgan and O’Neill were denied by try-saving tackles. A superb Gillett try-saver led Coote to be penalised for a double movement, unable to resist the urge to stretch out.

An awkward 77th-minute lifting tackle from Hunt on Linnett left the halfback on report and allowed the Cowboys to move into attacking range for one last charge.

When Thurston was left without a runner to receive the ball and smashed for his trouble on the fifth play Granville was forced to take the kick and when Brisbane cleaned up the match appeared to be over.

But the Cowboys got one last chance at them and Morgan came good, Feldt scored the equaliser and the rest was history.