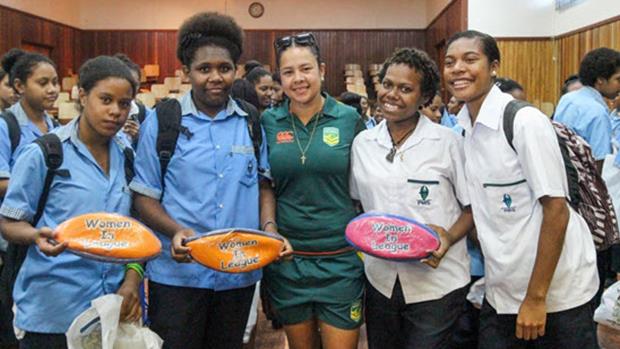 Jenni-Sue, whose parentage is Marshall Lagoon and Kairuku in the Central Province of Papua New Guinea, delivered a speech and answered questions from 200 female students about her success in obtaining her goal of becoming an Australian Jillaroo.

Jenni shared her stories about her decisions, sacrifices and struggles she faced in obtaining her ultimate goal of wearing the Green and Gold jersey.

Questions ranged from what it took to achieve her goal to who her greatest inspiration is, and the greatest challenges she faces.

Two key elements of success that Jenni Sue shared with the students were to always believe in yourself and to never give up on striving for your goals, no matter what circumstances or challenges you face.

Students all received Women in League rugby league balls as part of the event and POMIS has asked that the NRL PNG team now hold regular Girls Rugby League Fun Days as part of the school term calendar, an excellent outcome from the event.

Jenni Sue also gave a briefing to PNGRFL Women’s Rugby League coaches and captains on the set up of women’s rugby league in Australia, and in particular in Queensland.

Jenni Sue gave a summary on:

The female PNG players and coaches shared their struggles and passion for the game.

Highlights from the discussion were:

Overall it was an extremely successful visit by Jenni Sue who is an excellent role model for Papua New Guinean Women and ambassador for the NRL.