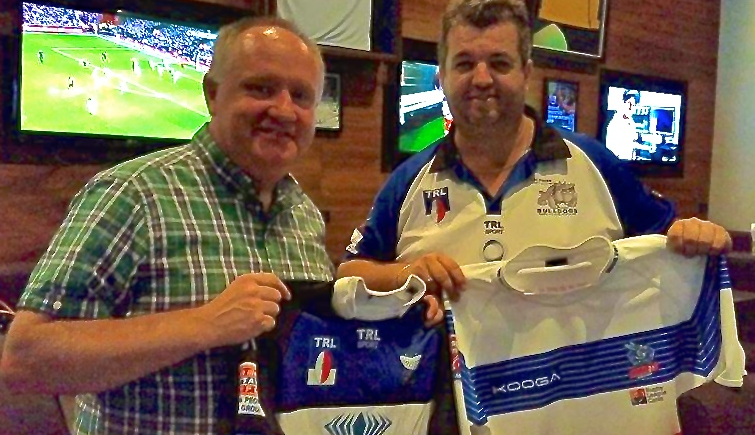 Rochdale Hornets have agreed a Friendship Partnership with the developing Thailand Rugby League.

The two men exchanged shirts with Hornets being presented with a players shirt from the 2014 Thailand Rugby League Champions Pattaya Sharks and Hornets donating a brand new 2015 season playing jersey.

Wynn and Crane then went onto discuss the development of the game Internationally and the benefits available to both organisations of cross promotions, social media and exchange visits.

Hornets Chairman Mark Wynn said “I have always been a big supporter of expanding Rugby League Internationally and Thailand are making remarkable progress which should see their domestic competition group massively in the next few years.
Shannon and his team at Thailand Rugby League are doing fantastic work and as a founding club of Rugby League Rochdale Hornets have a duty to support those who work so hard to promote and expand our game”.

Thailand Rugby League CEO Shannon Crane added “We are expanding our domestic league to 10 teams this year, we have 4 International games planned for October and an International 9’s event in Pattaya in June.
We hope to gain Rugby League International Federation Membership shortly and our major goal is to aim to qualify for the 2021 Rugby League World Cup”.

On a practical level the relationship will see Hornets encouraging its supporters and those of other clubs who are visiting Thailand to get along to a game and show support for the great work being undertaken there.
Also if any players or qualified coaches are visiting Thailand they will be encouraged to help coach a session for the players who are relatively new to the game.

For Hornets, Thailand Rugby League has a huge social media presence with over 26,000 Facebook followers which Hornets can promote club membership and possible merchandise sales.

Thailand Rugby League is also looking for overseas teams to visit and they are keen to look at the possibility of a female representative side to play against the newly formed Thailand Ladies Team.

Wynn went onto say “One of the major learnings from the 2013 Rugby League World Cup was the power of International Sport. It opens up doors that would otherwise be closed. It is the responsibility of us all to push the game forward and the huge success of the Fiji V Ireland game gave us a glimpse of what we can achieve”.