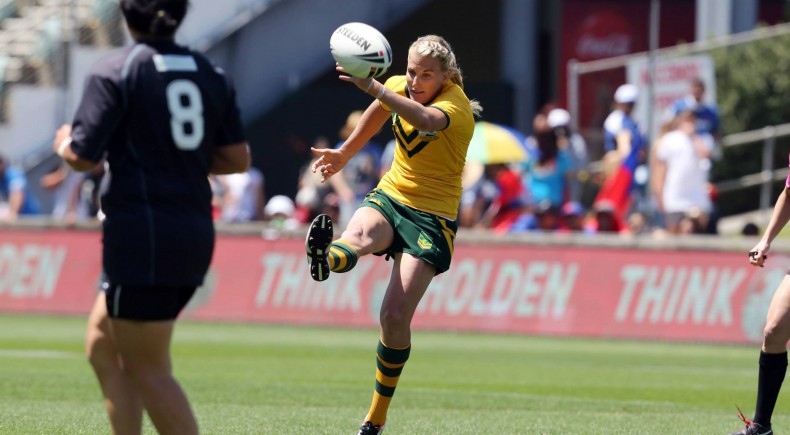 Four newcomers have been included in a preliminary Australian Jillaroos squad ahead of their Test match against the Kiwi Ferns in May.

Indigenous All Stars players Latoya Billy, Casey Karklis, Mahalia Murphy, and Tallisha Harden will join the Jillaroos for the first time when a 21-strong squad goes into camp at the end of this month.

A final squad of 18 will then be selected for the Test Match on May 1 at Brisbane’s Suncorp Stadium in the curtain raiser for the 2015 ANZAC Test between the Kangaroos and the Kiwis.

“These girls all performed outstandingly well for the Indigenous All Stars and deserve their selection,” he said.

“Mahlia Murphy at fullback was a standout, Latoya has some great pace out on the wing and Casey Karklis showed a good kicking game. While these girls are relatively young they provide options for us in the Jillaroos side and I think they all have a future.”

“If they impress in the camp they will certainly be considered for the Test match. Either way it is a great experience, especially for the younger players, to be part of the camp – to enhance their development and become familiar with the other players.”

A familiar face to the Jillaroos outfit, Karyn Murphy, will be making a return, but this time in a coaching role, joining Steve Folkes as Assistant Coach.

The former Australian and Queensland State of Origin player brings a wealth of experience – and Folkes is looking forward to having her on board.

“She has been in the women’s game for a long time now and is still heavily involved so her opinion and knowledge will be very helpful,” he said.

“She also knows a lot of the girls well – she’s even played with some of them – so it is great to have someone who has those established relationships and I look forward to having her on board.”

Headed up by Captain Stephanie Hancock, the remainder of the Jillaroos squad includes players who have gained significant experience recently in the Four Nations curtain raiser match and during the Auckland Nines.

“The support the Jillaroos have received in recent times has been fantastic, and the fact that we are able to hold a training camp in the lead up to this Test match gives us a great advantage,” he said.

“We can pre-empt game situations and really focus on our attacking and defensive styles.

“The women’s game has received fantastic exposure in recent times and hopefully it will encourage other women to consider rugby league as a participation sport.”

Jillaroos Performance squad to go into camp on March 27 on the Gold Coast: