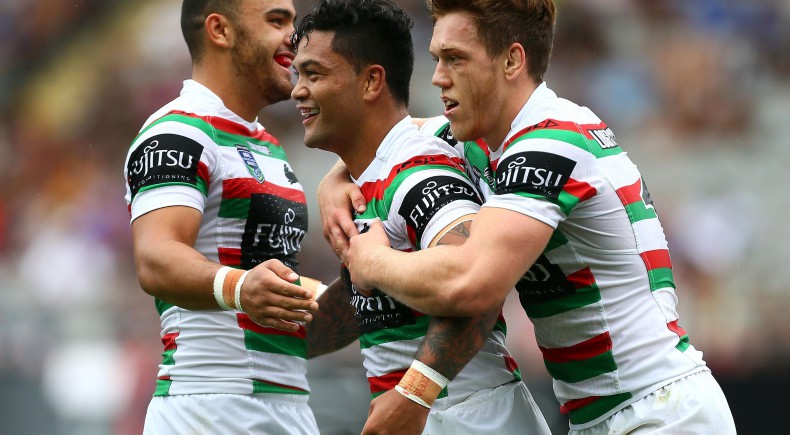 A stunning and memorable Auckland Nines final has been claimed by South Sydney 18-14 after nearly 10 minutes of golden try extra time and after overcoming one of the most remarkable defensive displays the format has ever seen from a resolute Sharks outfit.

A stunning sideline conversion on full-time from Cronulla’s Valentine Holmes sent the match into extra time before the Sharks defended their own line non-stop for five minutes in the face of relentless South Sydney pressure, until retired Rabbitoh Matt King capped off his comeback tournament in the perfect fashion with a match-winning try.

The Rabbitohs started the match strongly with a powerful opening set finished off by a precision kick and chase from Adam Reynolds to earn his side a repeat set.

George Burgess was heavily involved in pushing the Sharks back before a good chip out wide from Dylan Walker was turned into an excellent one after Bryson Goodwin produced a brilliant take under pressure, spun out of a tackle and grounded the ball for a try. Reynolds iced the tricky conversion from out wide to make it 6-0 before the Sharks had touched the ball.

When they did finally get their hands on the pill, skipper Wade Graham set up Cronulla’s reply with a wide draw and pass before a quick tap-on from Valentine Holmes sent Sossaia Feki streaking away to score, although Holmes missed the tough conversion.

A stripping penalty later in the half put the Sharks on the attack and Graham nearly scored after a runaround move with Gerard Beale but the ball came loose as he pressed for the line.

A good Issac Luke kick out of dummy half at the end of the next set forced a Sharks drop-out, and Luke’s layback for Chris McQueen threatened but McQueen couldn’t get a clean grab on the ball.

Then out of nowhere, a Chris Grevsmuhl charge-down on a Beale downfield kick seconds before the half-time siren saw the big prop run away and score untouched for a 10-4 lead at the break.

The Sharks needed something special to start the second half but it was Reynolds controlling proceedings again, with another pinpoint kick chase earning a drop out. But a clever Cronulla restart saw the impressive Ayshford grab the ball, and he linked with star rookie Jack Bird to race the Sharks downfield.

Bird was the provider seconds later with a quality draw and pass over the top to put Holmes over in the corner, bringing it back to 10-8.

A Jason Clark charge helped the stretch Rabbitohs further in front when Cam McInnes produced a sharp dart out of dummy half to bustle over, although Luke missed the straightforward conversion.

The Sharks allowed the kick-off to bounce dead then had to deal with yet another massive Burgess charge returning the drop out.

Tempers boiled over when Walker took exception to a tackle from Beale and Kyle Stanley retaliated, with players running in from everywhere in the first and last flare-up of the weekend. Souths were given the penalty and a Clark grubber forced another dropout.

With the Sharks really up against it, a crucial Pat Politoni steal and run put the Sharks in attacking position and Holmes produced a slick pass to send Bird over in the corner. But with just seconds remaining, Holmes faced a must-kick sideline drop-goal effort to level the scores.

With the shot clock winding down Holmes slammed the ball straight between the sticks to huge roars from the crowd, sending the game to a first-ever golden try period.

The Sharks sent the kick-off deep into Rabbitohs territory and seemed to find a second wind in defence. Needing a big play, Reynolds pulled out a pinpoint 40/20, then a rampaging Burgess was pulled down millimetres out.

The Sharks held on to the final tackle but a penalty conceded by Feki gave the Rabbitohs another full set on the Sharks’ line.

Reynolds forced another drop-out with a well-placed grubber, with the Sharks enduring another set of six before diving on the loose ball on the last – having defended for all five minutes of extra time so far.

Souths looked to have finally clinched victory on their next set when a floating pass from Luke sent Reddy away to touch down in the corner, but as the Rabbitohs bench began celebrating Luke’s pass was called forward by the officials.

The Sharks threatened at the end of their set but Bird lost it forward, and Reynolds ended the Rabbitohs set forcing yet another dropout.

Finally, after countless tackles and possibly the longest tryless passage in Nines history, Luke fired a ball out to the evergreen Matt King who swept over in the corner to claim the tournament trophy in arguably the most remarkable game the format has seen in its short history.