Home > APRLC > Philippines make it two in a row

Philippines make it two in a row 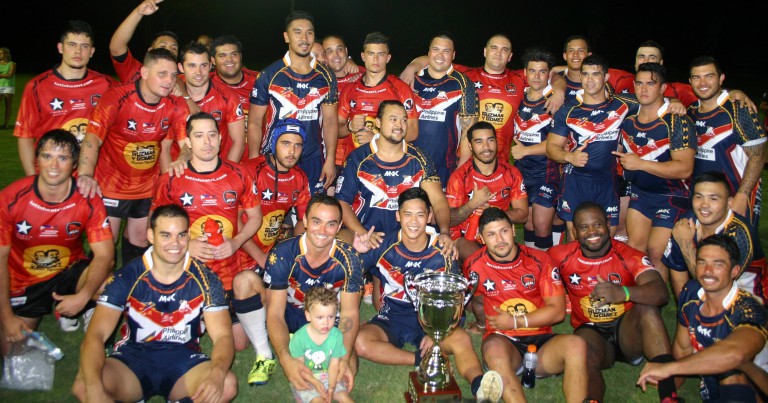 It was a 38-point improvement on the corresponding game from a year ago, but still Latin America was disappointed to go down 80-4 to the Philippines in Saturday’s Magellan Trophy rugby league match in Brisbane.

While the Tamaraws march on in their quest to become the first South East Asian side to qualify for a Rugby League World Cup, the GYG Latin Heat will take stock and rally together for even greater improvement in the coming 12 months.

The second staging of the Magellan Trophy was a closer affair than the scoreboard indicated, with the blistering temperature and a rash of injuries leading to a late blow-out in the score.

Indeed the margin at halftime was 34-4 and nearly all Filipino tries were scored by creating an extra man out wide, rather than punching through the middle.

Still, arguably the loudest cheer for the evening came when Argentinian teenager Jacob Giuliano scored a spectacular 70m try after kicking the ball twice, regathering and sliding through cover defenders to score.

Even members of the Filipino bench rose to their feet to applaud the effort.

“It doesn’t look great on the scoreboard, but we were definitely in a contest,” Philippines halfback and former NRL player Paul Sheedy said at fulltime.

“Every tackle you felt the contact and there are some talented boys in that Latino side for sure.

“The distance they have come from last year (when Philippines won 114-0) is awesome.”

The GYG Heat were cruelled when pivotal halfback Eddie Ventura and winger Josh Correia withdrew from the match at short notice.

It forced development players Luis Guillermo Fhon and Diego Vejerano to play a second game on a day where the temperature reached 35 degrees.

To add into the mix prop Eduardo Wegener pulled a calf muscle in the first five minutes and Jaden Laing (back), Joshua Munoz (shoulder), Giorgio Robertson (shoulder) and Giuliano (concussion) all spent significant time off the field.

“On one hand the result was a mark of our improvement in 12 months, but it was also a sign of how much room there is to grow,” said Latin Heat president Robert Burgin.

“Each and every player that stepped onto the field gave us everything they could tonight and you could see that in their sweat-drenched jerseys and battered bodies.

“Although everyone was keen to test themselves against the Philippines again, we are probably not in their league yet and we’ll pick future opponents where contests are more even and useful for the growth of our players and squad.

“Right now what we need is all those Latin Americans and rugby league fans out there to rally behind our guys, show support and get involved if they can, so we can take this to the next level.”

Two positives from the day were the strong crowd numbers and the fact Latin America has increased its player pool by 200 per cent in a year alone.

United Nations led the Philippines 26-18 thanks to big games from Aziz Ali (Iraq), Pacific Bakera (Burundi) and Jeremy Mulitalo (Argentina) before the Young Tamaraws steamed back to win 28-26 in the shades of fulltime.

In the Development Cup, the much more experienced Philippines side ran away with a 50-0 win, although vast improvement was shown by a number of Latin Heat newcomers.

The day was the first time Latin American Rugby League has performed a war chant before the game, with Grantito Chacone giving an inspired ‘Yaoyotl Och Acelotl’ (Jaguar Chant) to great applause.