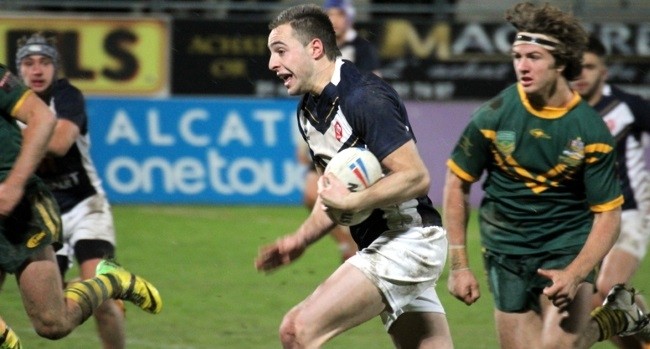 The Australian Schoolboys won their first match on the French leg of their 2014 European Tour with a narrow win in wet and stormy conditions largely thanks to Endeavour SHS’s John Olive who scored three tries in the 20-30 win.

After 6 minutes Aussie winger Connor Cox went in for the tourists, with centre Olive scoring his first out wide. Connor Tracey added the two points. At the 30 minute mark winger Braden Robson scored, with Tracey missing his second, to give Australia a 0-14 lead at the break.

It didn’t take long for the Schoolboys to get into gear in the second half and after only 4 minutes of play, Olive bagged his brace, Tracey adding the extras to give his side a 0-20 lead.

Then came the French fight-back, first through winger Bergal Ilias, then on 59 minutes through centre Benjamin Julien after a great move, with fullback Amine Miloudi adding one conversion to make it 10-20.

Jacob Liddle burst France’s balloon after a good solo effort with Brock Lamb, now on kicking duties, converting. As tempers began to fray both sides were temporarily reduced to 12 men temporarily, with France taking advantage through a try by Timothey Granjean (pictured) to bring his side back to within two scores and excite the crowd of 1,214. John Olive’s third try with eight minutes left dampened their spirits and put the game beyond France, who at least had the final say through Fabien Jullien’s try on the siren.